Today’s blog post is actually the end result of a request from my brother for something along the lines of a quick-fix breakfast that’s delicious, healthy, and portable – all at the same time. (And no: I was not to even think about fixing him a smoothie.)

Well, I pretty much left that particular notion on the back burner until Fr. Jeff called home last Friday and told us he’d been given his first parish! Starting tomorrow, he’s taking over the helm at St. Joseph the Worker church over in Las Pinas. Sheer and absolute cause for celebration, if you ask me. 🙂

That said, I wondered what to give him for a housewarming present – or at least a fortifying snack for the moving day clean-up. Then I remembered his request for a filling yet totable way to start the day.

Shown above are the chewy, nubbly, moreish end-results of last weekend’s baking experiment: banana-cino breakfast bars. These chewy babies are loaded with a mix of oats, bananas, cinnamon, coffee, chocolate chips, and cashews. Packed with vitamins, fiber, and a teensy bit of caffeine, it’s definitely something you can grab when you go.

Sift together the flours, baking soda, coffee, cinnamon, and salt; set aside. Line a lipped cookie sheet with greaseproof paper or a Silpat liner; set aside. Preheat oven to 375 degrees / Gas Mark 5.

Cream together the margarine and sugars until light and fluffy. Add the mashed banana, egg and vanilla; stir till well-combined. Add the flour mixture in thirds, stirring with each addition. Add the chopped nuts, chocolate, and rolled oats and mix till well-combined.

Spread the mixture evenly onto the prepared cookie sheet. Bake for about 30 minutes. Remove from oven and allow to cool for about five minutes in the pan before cutting into bars.

Nama. Since these gorgeous cocoa-dusted cubes of ganache first hit Philippine shores in mid-2008, die-hard chocoholics have been on the prowl for them, like hardened addicts seeking that powerful, mind-numbing, soul-shattering hit. On one hand, if you want to be “in”, you could always head over to either Kombini in Greenhills or the Royce stall over at Greenbelt V to get your fix. However, speaking as a serious chocoholic, nibbling on cubes of Royce just doesn’t do it for me – heck, I don’t even know why people are so willing to pay an arm and a leg for these cubes when they – on my palate, anyway; I don’t know about everyone else – leave a waxy aftertaste.
Go ahead and call me a non-conformist “food commie”, but my nama of choice will always be Sachi. And now that the new Sachi Black line of premium ganache truffle cubes is set to hit the city this December, there can be no turning back for me.

Sachi Black is being touted as the darker side of nama: darker chocolate, a dollop of strong wine or liqueur, a dusting of cocoa et laissez les bon temps rouler! (Fr.: “let the good times roll”) The resulting flavor combination is one that attacks the tongue in waves or layers. One’s first impression is the dusky bitterness of the cocoa that covers each square: a smoky taste that opens up the senses for the delights to come. Then comes the creamy richness of the ganache itself; a sultry unctuousness that wraps one’s tongue most languorously while teasing it with the rich flavor of chocolate tempered with rich cream.
Of course, if you’ve been eating nama for quite some time now, you’re going to tell me that everyone who’s eaten the stuff has had that experience. Okay, but here’s the clincher: unlike the original Sachi Gold line of nama, there’s no milk involved so there’s no mild nuttiness in these bad girls. And unlike other liqueur-filled nama, this one is chocolate through and through.

While there are actually five variants in the Black line, only four were currently available for tasting at the sessions held last Saturday, 14th November, at Heavenly Chocolates. “Choco-vangelist” Benjie Pedro was, of course, on hand to walk Sachi devotees through the new flavors.
The session opened up with the mildest of the four: Sake. This particular nama has a mild malty-ness, a somewhat nutty sweetness that calls to mind freshly pounded pinipig (crushed and dried young rice kernels). Because sake is more subtle than other Asian rice wines (basi from the Ilocos Region and the ceremonial tapuy of the Ifugaos – both robust libations – come to mind), the end result is a chocolate truffle with a pleasant delicateness to it that will be appreciated by those who tend to indulge in a genteel fashion.
Champagne was the next flavor to come tempt our tastebuds. Now, those of you who have had the champagne nama from the Sachi Gold line will recall that it has an ever-so-faint effervescence to it and a bright, fruity spin to the flavor. The champagne variant of the Black line, however, has a bolder, more pronounced fruitiness – like properly dried raisins just plucked off the vines after a day in the sun. It is warmer, but certainly effervescent. To compare this to the Gold champagne, would be like comparing a doux (sweet) Moet et Chandon with a dolci (sweet) Asti Spumante – both are perfect for celebrations, but the former is certainly more elegant than the latter.
It was the third sample that brought sharp differences of opinion among the participants. Not many people, you see, are familiar with yuzu – better known as Japanese citron and is similar in appearance to those sweet yellow-green oranges grown in Nueva Vizcaya. To describe its aroma and flavor is to say this: it has the bold aromatic nose of pomelo (suha / pink grapefruit) but with the slightly tart sweetness of dalandan (native citrus / orange). Now, while citrus with chocolate is a classic combination, I couldn’t help but think that the confectioners went a bit overboard with the Yuzu Vodka nama. The intensely citrusy aroma is what hits you as you pop one into your mouth. Then, after the initial duskiness of cocoa, what hits you isn’t chocolate but pure, overwhelming oranginess. While I do like chocolate-dipped orangettes and love orange chocolate almond ice cream, there was a bit too much citrus in this one for me. All due respect to the chocolatier de maison, but I think someone threw in either too much rind or juice into the infusion. Choc-orange fans may love this, but I think I’ll pass on this one.
Which brings us to the last sample on the menu: Port. Speaking as a die-hard fan of Sachi Rum nama, I love liqueur-infused chocolates so long as they aren’t so boozy but still have a bit of kick to them; that said, Port nama doesn’t disappoint. One bite of this robustly-flavored bonbon, and two things automatically pop to mind: the sweet but not cloying taste of Mompo or Vin Santo (the wine used for celebrating the Mass) and the richness of very good sherry. Like the fortified wine that gives it that distinctive flavor, this is one nama better appreciated by men rather than women. (Unless, of course, they’re women like me who actually prefer stronger flavors.) I can imagine gentlemen enjoying these with coffee after dinner in lieu of brandy; cigars, of course, are optional. 🙂
Along with a host of other festive confections, Sachi Black nama will be available at Heavenly Chocolates this December.
Heavenly Chocolates – Ground Floor – Roces Center, Roces Ave. near the corner of Tomas Morato, QC. Call 666-22-08 to inquire about their free monthly Chocolate Appreciation 101 workshops. 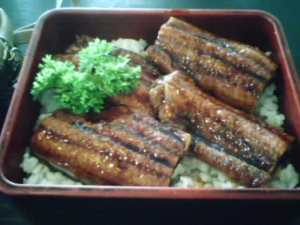 Say this about grilled eel [unagi kabayaki]: it’s one of those things I tend to reserve as either a treat on an exceptionally good day or a fortifying pick-me-up on the most horrific days.  On those days, I can always kick back and relax with a plate of eel and rice before me or suffocate my sorrows with an o-bento of the stuff.

So, when does the monstrous affair at the top of the post come in?

With four eel fillets atop a box – not a bowl – of rice, this baroque affair is referred to as an unaju, an unadon [unagi-don] on a much bigger scale.  For one thing, there’s more eel.  It’s served in a large box rather than a bowl and it’s quite a deep box and there’s quite a bit more rice involved.

This particular treat is from Omakase; it’s what I have when I know things are definitely going my way.  😉

The bowl of soup shown above isn’t the prettiest thing in the world, but let me assure you that it is in the running for one of the most nourishing, most comforting foods ever.
This is laksa – at least, this is how laksa is done in the provinces surrounding Laguna de Bai. Unlike its Nonya namesake in Singapore and Malaysia, coconut milk and fat rice noodles do not come into play in this particular dish. Instead, sotanghon – springy-textured mung bean vermicelli – is cooked in a clear broth with shredded banana blossoms [puso ng saging – lit.: banana heart] with ground pork, onions, and garlic.
This can be served as a first course; the broth is mild yet flavorful, just the right thing to whet your appetite. At our house, though, this is considered more of both a main course or a heavy side dish. The pork, noodles, and shredded banana blossom are fab over a good plate of steamed rice. 🙂

The problem with pulling long hours at work is that sometimes (well, in my case, make that most of the time), one comes home too late to get a proper dinner with the family.  In such times, I will either just go to bed tired and hungry or take the precaution of buying something from a supermarket food stall to eat on the long bus ride home.

And there are times when I actually see something substantial on offer and willingly save it till I get home.

What you see above is an order of Maki-balls (pork meatballs flavored with soy sauce, onion, and a hint of ginger) on rice from the Maki Mi Sushi stall over at the SM Supermarket in Makati.  On its own, it can be rather stodgy and bland, though the sukiyaki-style sauce you can drizzle over it helps cut back on the blandness even for a bit.  (It’s still a better deal than just a sandwich and a soda, though)

When I got home, I was lucky enough to encounter some buttered vegetables – a mix of baby corn, diced carrots, and asparagus – left over from everyone else’s evening meal.  I tossed these into the bowl along with the meatballs, gave it a generous sprinkle of Knorr Liquid Seasoning, made a hot mug of soup from a Campbell’s sachet, and had myself a fine – if a tad lonely – dinner.