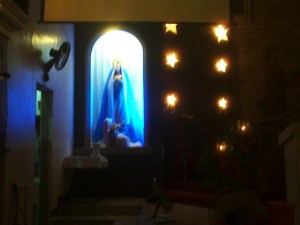 Immaculate Conception on the left side of the altar (Parish of St. Joseph the Worker)

Some time ago, I mentioned that my brother recently got his own parish over on the boundary between Paranaque and Las Pinas.

As we traditionally head on over to wherever he’s celebrating Mass on Christmas Eve, we have been attending Midnight Mass over at the Parish of the Presentation of the Child Jesus in BF Paranaque for the past three Christmases and heading home immediately afterwards for the midnight supper.  This year, as Fr. Jeff now had his own “home” so to speak, we decided to eschew the part about heading home ASAP and brought the midnight collation over. 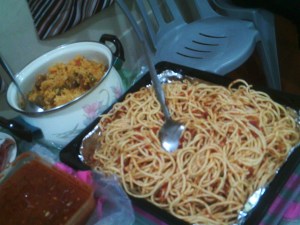 I mentioned in one of last year’s Holiday posts that paella Valenciana (sans the seafood) is my family’s Christmas dish of choice and custom.  While my mother did whip up a major league batch of that Spanish rice dish oozing with savory goodness, that was the full extent of the Christmas cooking she did this year.  Given the circumstances, I decided to spare my mother some of the trouble and bought a movable feast from Bizu.

Aside from the customary products of the French patissier and boulanger‘s arts, Bizu also does catering for special occasions and has a scrumptious line of massive roasts and party trays that can serve anywhere from ten to thirty people in one go.  The fact that they come in totable trays also means that you have all your family’s potluck problems solved.  😉

For this year’s family feast, I ordered Bizu’s tangy-savory spaghetti pomodoro which came in a large tray with two generous tubs of a chunky tomato sauce made fragrantly heady with fresh basil and a hint of thyme.  Two smaller tubs of grated Parmesan were also on hand for sprinkling over, but seemed almost anathema because the robust tomato flavor didn’t seem to need further embellishment.

My sibs described the salad above as the “Mother of all Caesar salads”.  It was, to them, as if a whole vegetable farm had been depleted of its main stock in trade to make such a salad!  Despite the fact that the salad had traveled from the store at the Alabang Town Center to our house and then over to Las Pinas, it was still deliciously crisp and fresh-tasting.  Bizu’s Caesar dressing beats everyone else’s hollow, in my personal opinion, as it was subtle yet wonderfully garlicky with a real lip-smacking flavor of anchovy.  The herbed croutons were crisp, buttery, and I seriously suspect that these were made from cut-up brioche rather than baguette. 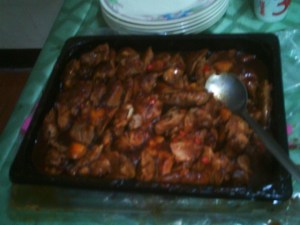 The main course for the feast was a generous tray filled to the gills with tender, smoky roast porkloin smothered in a mango-infused barbecue sauce with a sweetish tang that served as a lovely counterpoint to the smoky-tasting meat.  Pork is a traditional Holiday meat in this part of the world, but it usually comes to the table as either ham or a whole lechon.  This was certainly different and it reminded me of the smoked porkloin we sometimes had for breakfast when I was much younger only with less of the salt and more of the savor.  There were chunks of beautifully ripe mango scattered throughout the dish and we kept a keen eye out for our respective share of the fruit.

We rounded out the meal with some fruit-studded mini gelatin molds prepared at home a couple days before, some gorgeously rich custaroons (a cross between coconut macaroons and custard) given to my brother by one of his parishioners, and fresh, delicately ivory-fleshed latundan bananas.  Despite the fact that no wine was served this year (Given where we were, it wouldn’t have been proper.  :D), the fact that we were all together for Christmas meant that a good time was had by all. 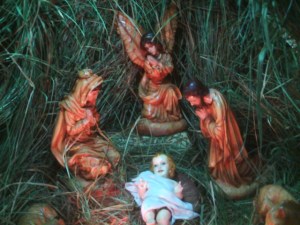 Nativity at the Parish of St. Joseph the Worker (detail)

Have a Blessed Christmas, everyone!  🙂 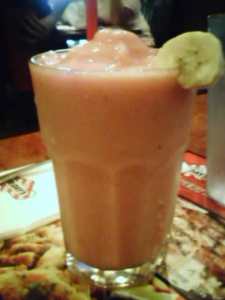 This is one of my favorite sippers over at TGIFriday’s: the Gold Medalist smoothie.  It’s an essentially non-alcoholic bev made with pina colada mix blended with strawberries, bananas, and grenadine syrup.

Despite the fact that I prefer to bake my presents rather than buy them, there are some items that are so unusual that you can’t help but actually buy them either for yourself or for those you hold dear.
These chocolate-maple pili nuts from Heavenly Chocolates are such an example. Think buttery pili nuts from the Bicol Region tossed in smoky-sweet maple sugar and coated with the shop’s luscious house blend chocolate. A medium tin, as shown above, will set you back PhP 285.00 (about US$ 6.11 at today’s exchange rate), but it’s a small price to pay for a bit of chocolate-coated bliss.
Believe me: your friends will love you for it. 😉

I have a confession to make.
I’m a serious, die-hard, absolutely besotted, painfully addicted takoyaki junkie. There’s just something undeniably moreish about these toothsome, savory morsels originally made in the Japanese port city of Osaka.
When I was a kid, the only place you could actually get takoyaki was a small stall called Samurai Foods by Little Sugi inside the old Rustan’s Supermarket in Makati. These days, there have been a number of cheap knock-offs and a rather posh take on this Japanese street snack that make for perfect afternoon noshing.
Here are my current faves: