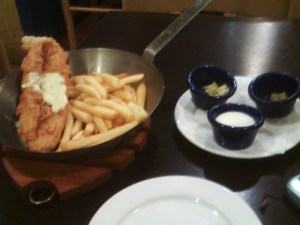 The BEST fish and chips? Hmm...

It’s Lent – you know what that means: fish on Fridays.

Not that I’m complaining, of course, I like fish – especially fried fish!

Fish and chips have long been a favorite.  Batter-fried fish are a Lenten staple at our house and fried potatoes are just plain damned sublime in my book.  I love the stuff they used to sell at a shop called Sea Beauty Fish Treats when I was much younger: my brother and I used to fight over the chips and the tartare sauce.  As the years passed, there were more chippie haunts to choose from: TGIFriday’s does a jim-dandy seafood and chips platter and Racks used to do the dish in a tip-top manner.

But the platter – no, skillet – shown above takes the cake for the most confident name ever: Fish & Co.‘s The Best Fish and Chips in Town.

It’s essentially a large, batter-fried creme dory fillet with a splash of lemon-butter sauce and thick-cut fries.  A platter with some mayo, chopped pickles, and chopped jalapeno peppers rounds out the setting.

The crust on the fish is properly crisp and seasoned nicely and the fish within is toothsomely tender, almost melting, with a mild, savory flavor.  I recommend mixing the jalapenos into the mayo to add some zing to the fish, though the lemon-butter sauce works fine on its own.  I just wish there was more of the lemon butter, though…  :p

I’ve had better fries, but the ones here work well, too: crunchy on the outside, mealy on the inside.

I wouldn’t really call these the best fish and chips in town, but I have to admit they’re very good.  😀

2 thoughts on “The Best Fish and Chips in Town?”