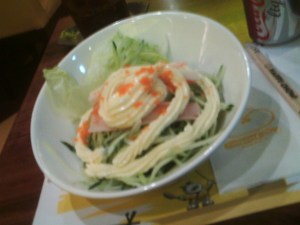 Despite the downpours of the past couple of days, the weather in this part of the world remains scorching, killing even the heartiest appetites.  So how does one get enough sustenance to get through the day despite the heat?  Why, by getting a salad, of course!

While a classic Caesar is always nice and chopped salads are a perennial favorite, the salad shown above is particularly summery: the kani salad at Teriyaki Boy.  While it’s a very simple concoction, it actually does a fine job of satisfying your craving for sustenance while cooling you off.

Essentially, it’s a very basic mix of shredded cucumber and iceberg lettuce.  The dressing is just Kewpie-brand mayonnaise and shreds of crabstick and crisp, savory bubbles of tobiko – cod roe.  So simple, so good, and so summery. 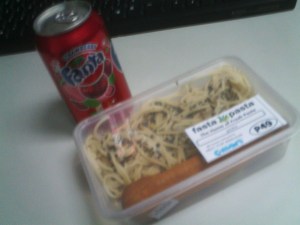 I’m still not out of my blue funk; in fact, I’m feeling more than a little under the weather.  Throw in some incredibly tight deadlines, and I’m practically chained to my desk.

Which is why I’m grateful for the Fasta Pasta and oriental box lunches over at C-mart on the ground floor of the Pacific Star Building.  A mere PhP 49.00 gets you a healthy helping of pasta (the Creamy Pesto shown above is good) or a good meal of siu mai and pan-fried Chinese noodles or lemon chicken and veggie fried rice.  (Oh, and the lemon chicken, while not crunchy the way North Park makes it, is delightfully tart, sweet, and savory all at once.)  Pop into a microwave, nuke for a minute, and you have a satisfying lunch.

Oh, and throw in an additional P 38.00, you can get a Fanta Cherry or a much-missed Cherry Coke to slake your thirst.  At a little less than P 100.00, it’s definitely a good lunch deal for a desk-bound corporate minion.

Now, about those deadlines… 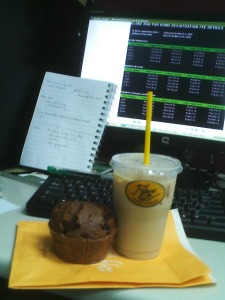 There are days when one feels as though he or she can never seem to do anything right.  When those days hit me, I don’t feel much like eating, but I have to keep some form of food nearby.

It’s just something to nibble on; it keeps me from crying too much.  (Except today, alas; I just don’t feel like eating at all.)

Don’t mind me, dear riders.  I’m just going through an extremely rough patch because everyone has been telling me I’m so damned useless, that I have no talent, and that I should just kill myself already.

You all know, of course, that I’m stronger than that.

Back to regular blogging tomorrow, dears. 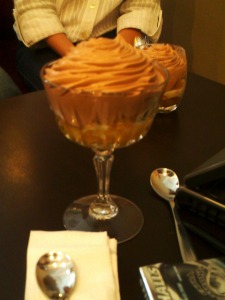 Where does all the time go?!  Has it really been five years since I started a blog on a whim in order to stave off what was getting to be an appalling case of boredom?  Why, yes it has!

When I started SybDive in April 2005, I was a technical writer for Trend Micro and I was still smarting from a very traumatic experience with a previous employer.  At the time, I was suffering from a serious case of clinical depression and was at sixes and sevens about what to do with my life.  Writing about food, cooking, baking, and then some actually helped me get through that rough patch in my life.

Since then, I spent nearly four years in another IT company and recently made the decision to move back to the fields of PR and advocacy.  And I’m still cooking, baking, and eating my way through life and I still chronicle these experiences through this blog.

And here’s to all of you who have been part of my journey.  I hope that you will continue to enjoy food with me – even virtually – for years to come.  🙂

If you ask me what usually appears on Filipino lunch or dinner tables in the summer, the word inihaw (grilled / roasted on coals) will be part of the answer.  Like American or Australian families in the warmer months, the urge to slap slabs of meat (or chicken or fish) onto a grill over glowing coals or an open flame grips Filipinos and the very act produces viands that are perfect for feasting on with one’s bare hands.

Pork is the meat of choice for grilling in this country, as most shy away from beef as it costs more, it can be quite tough if cooked improperly, and most Filipinos don’t care for the rather gamey flavor of locally-raised cattle.  Besides, there is something about the fatty richness, the savory-sweetness of pork that makes it perfect for grilling.  Whether it’s skewered chunks of pork tenderloin threaded with pork fat on skewers or thickly-cut slabs of richly marbled belly, all one needs to do is soak the meat in some soy sauce, kalamansi juice, and a hint of brown sugar and it’s all systems go.

Chicken drumsticks and pork belly on the grill. (Photo by Dong Bernardo)

Another popular summer meat is chicken, specifically the legs, which are also soaked in a soy-based marinade and cooked till the skin is beautifully charred with a rather burnished glow.  Barbecued chicken tastes very good with Thai-style sweet chili sauce or the sweetish / tangy banana ketchup sold in local supermarkets.  In my opinion, however, chicken barbecue tastes best with the dark, rich, peanut-based barbecue sauce made popular by restaurants like The Aristocrat and its spin-off Reyes Barbecue.  (Thank goodness they now sell the stuff in bottles you can bring home!  It pays to have one for outings!)

Grilled seafood is the preferred pulutan (bar chow) of choice for many Filipino drinkers, but even those of us who don’t indulge in the fruit of the vine (grape or hop) love the stuff.

Squid is a favorite, but squid is a rather fiddly thing to grill: cook it too lightly and it stays floppy and somewhat slimy; cook it too long, however, and it gets all tough and rubbery.  One trick taught to me by my officemates during our team-building/cook-off is to keep the squid in a large basin or a small bucket of slightly salted water before grilling.  This allows you to cook the squid till properly charred on the outside, but still meltingly tender on the inside.  Most people think grilled squid goes best with a cold beer; I think it’s perfect on plain rice with some ensaladang talong on the side.  :p

The kitchen brigade at work, stuffing tilapia. That's me in the striped maillot and green kerchief. (Photo by Jessie Aquino)

Pinaputok na Tilapia, a specialty of the Bicol region, differs from other grilled dishes in the sense that you don’t put the fish directly on the grill or the coals.  Instead, a slit is cut through the curve of the fish’s back; a filling made with minced ginger, chopped onions, diced tomatoes, and soy sauce is stuffed into the resulting pocket.  The stuffed fish is then wrapped in lightly greased banana leaves and the resulting parcel is put on the grill until the leaf begins to blister.  The fish inside is lightly charred and its insides beautifully steamed; the delicate flavor is enhanced by the fruity, smoky flavor imparted by the burnt leaf.

Cooking pinaputok na tilapia became something of a community effort for us.  One would dribble and spread a bit of olive oil on squares of aluminum foil (we forgot the banana leaves!), someone would chop things up for the stuffing, I took care of stuffing the fish, and someone wrapped them into parcels for grilling.  It was hard work, but it sure was fun.  🙂

Parceled fish on the grill

It all looks good, doesn’t it?  All we need is some soup – but that will have to wait for the next post.  😉