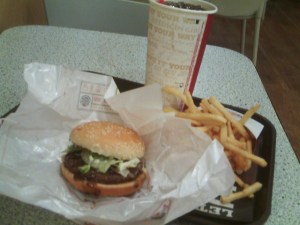 Despite the fact that McDonald’s broke onto the scene first, Burger King is the first thing that pops to my mind when people start talking about American fast-food.  For one thing, the decor is certainly reminiscent of a diner from the 1950s.  For another, they aren’t shy about super-sizing their meals.

So it came as an eyebrow-raising surprise when the shop started to offer a little taste of Korea on their premises.  And so we have: the BK Bulgogi.

Trouble is, once you’ve unwrapped the burger, it’s rather disappointing: 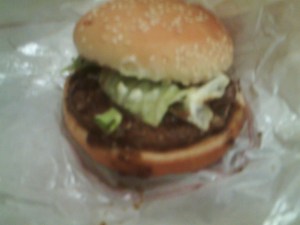 To be brutally honest at this point, it looks more like a conventional burger glopped with brown gravy and topped with scraps of iceberg lettuce.

Taste-wise, it’s pretty good: the brown sauce is quite garlicky and a touch sweet like a standard bulgogi marinade.  However, even this isn’t enough to save this sandwich from the brink of mediocrity.

Seriously – and if BK is true to its motto that they never mock even the most unconventional orders at the counter, I have the following suggestions:

Call me finicky, but really: if you’re going to tout something as Korean, you may as well go the whole hog and give your diners a most unusual experience.  😀