Be sure to get fresh veg!

The names that appear in most French cookbooks including the revered Larousse Gastronomique are soupe de potiron and potage au potiron.  Most people know it quite simply as pumpkin soup.

But it isn’t just a simple affair of pumpkin cubes suspended in broth.  A true pumpkin soup is faithful to the substance implied in the French word potage – pottage: a thick, rich substance closer in consistency to porridge rather than a classic cream soup.  It is a puree and, as Wikipedia puts it:

…is a soup made from a puree of pumpkin. It is made by combining the meat of a blended pumpkin with broth or stock.[1] It can be served hot or cold…

Appearance-wise, it should be nice and golden bordering on orange: think of the same color as the sunny yolks of organic chicken eggs.  Flavor-wise, it should have all the sweetness of fresh pumpkin, but not so sweet that it should make you think of dessert rather than a starter course or a main for one.

One problem I have here in the Philippines is the fact that American / British pumpkins – those big ones, orange-skinned when ripe, that are perfect for Hall’owe’en jack-o-lanterns – are rare; in which case, the flatter local kalabasa squash makes for a good substitute.  However, the flavor of local squash is less sweet than its western cousins.  This can be easily remedied by the addition of a good-sized carrot to the soup: it adds sweetness and the taste of the squash is robust enough to ensure that it isn’t overpowered by the root veg.

Also, while some cooks add parsley to this dish, I think spices would do a better job of making the flavors pop in your mouth.  The sharpness of ginger is mellowed and actually brings out the fruitiness of the squash.  Cardamom, which I prefer, adds a nutty taste that emphasizes the sweetness.  You could also use nutmeg or a hint of allspice. 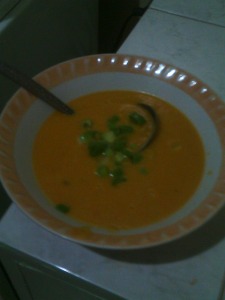 The method for making this soup is practically the same as that for the potage rustique I posted last month: boil veg in broth, blitz in a blender, add cream or milk et laissez les bon temps rouler.  😉

In a saucepan over medium heat, melt the butter.  Add the chopped onion and the white part of the leeks (reserve the green part for garnish); cook till slightly softened.  Add the garlic and cook till lightly browned.  Add the chunked vegetables and cook for a couple of minutes.  Add some ground cardamom and cook for about a minute more.  Add the chicken broth and bring to a boil.  Lower the heat and simmer for about 20 – 25 minutes or till the vegetables are soft enough to be pierced with a fork.

Remove the saucepan from the heat and pour the contents into a blender or food processor.  Blitz the soup till liquefied and smooth.  (Alternatively, if you have an immersion blender, just puree the soup in the pot.)  Return to the saucepan, season with the ground pepper, and heat through before adding the milk.

Serve in a tureen or a deep bowl, topped with the reserved chopped green leeks.  Serves about 6.