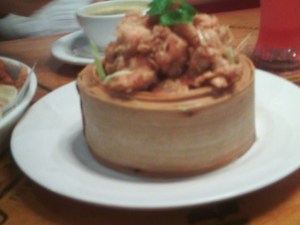 If there is any one seafood most people can’t seem to get tired of despite prohibitive prices and allergies, it has to be shrimp.  There is just something irresistible about these crisp-tender, succulent, sweet crustaceans that keeps diners riveted to their plates and makes them hungry for more.

Bubba Gump, named after the shrimping company formed by Forrest Gump and his friend Bubba in the now-iconic movie, is one of those places where you can happily stuff yourself with shrimp in numerous forms.  It’s a comfortable place where you can bring your family along for a major seafood feast or your friends for an evening of serious fun.

The evening a friend and I ate there, we decided to have the appetizers as we felt that a full entree would have been beyond either of us.  But such appetizers – !  A single appetizer can serve as a proper entree for an extremely hungry girl.

We started the meal with the Dynamite Shrimp.  These are plump little fellows tossed in batter, deep-fried, and drizzled with a rather peppery Szechuan-style sauce and served in a steamer basket.  This dish is dangerously addictive and, despite the heat packed by the shrimp, you’ll find yourself popping shrimp after shrimp into your mouth.

If you’re eating with a group of seriously undecided friends who are clueless as to what they want to eat, I suggest that you order the Run Across America Sampler.  What it is: a variety of honest-to-goodness Southern-style nibbles.  Each generously laden platter comes with a rich spinach-and-artichoke dip made with red capsicums and Monterey Jack cheese, nacho chips, cold steamed shrimp, breadcrumbed and deep-fried shrimp, spicy chicken strips, and – my personal favorite – Hush Pups.  Hush Pups are a cross between a Maryland crab cake and a classic cornmeal hush puppy: golden nuggets chock-full of corn, fish, and shrimp.  Instead of dipping these crisp little things into the remoulade that comes with the platter, dip them into the cheesy dip instead.  The flavor, I assure you, is rich and so good.

Oh, and to wash it all down, I suggest that you skip the bottomless lemonade and go for either the Speckled Pink Lemonade made with pureed strawberries or the Southern Blue Lemonade, a tart, tangy refresher made eye-poppingly so with the addition of sweet blueberry puree.

Now, about those entrees…