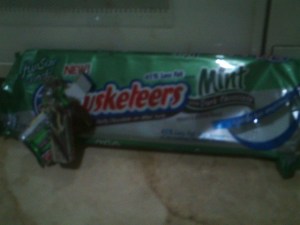 I’m not that big a fan of American candy bars: I think they’re too sweet, stodgy, and cloying.

Then I run into these dark mint Three Musketeers minibars and find myself thinking that they’re pretty darned good.  Then again, I adore dark chocolate – no matter how thinly it’s spread.  :p 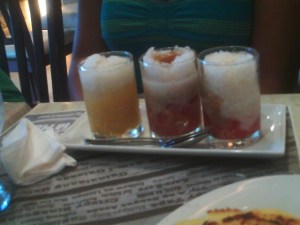 My two youngest aunts – Ging who trained me in oratory and Vicki who gives me great life advice – flew in from California last Friday with the former’s husband and daughter and the latter’s daughter in tow.  And, whenever my aunts are in town, good food is certainly bound to play a key role in family bonding.

From left to right, this assortment of icy-cold treats was composed of mais con hielo (creamed corn with ice, sugar, and milk), guinomis (diced pandan-infused gelatin and tapioca pearls cooked in a brown-sugar syrup and topped with milk, ice, and more syrup), and – of course – halo-halo made with the usual melange of ice, milk, sweetened saba [starchy] bananas, sweet potato, and sweetened beans.

My sister thoroughly enjoyed the mais con hielo (it is her favorite dessert, after all), but my California-born cousins preferred the guinomis and halo-halo which they both deemed sweet, flavorful, and utterly refreshing – perfect for a cloudy, muggy day.

When I was a kid, there was a Chinese-style restaurant along Roxas Boulevard, near the old Asian Development Bank Building (now, alas, the Department of Foreign Affairs) where you could get a whole fried chicken that tasted good enough to rival the one served over at Max’s.

What you got was a succulent fowl with burnished skin, the flesh tasting of five-spice powder.  It would come to your table (or in a white takeaway cardboard box) with gravy and fried saba bananas.  It was good.

The name of the restaurant was Savory (pronounced SAH-bo-ree) and it disappeared in the 1990s, but is making a serious comeback today. 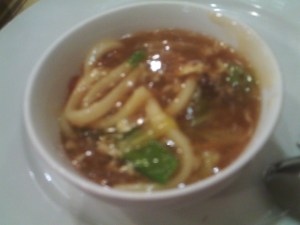 When our family went there for lunch one Sunday, we actually opted not to have Savory’s famous chicken.  Instead, we checked out the rest of the comida China (Chinese food prepared to suit local palates) on the menu.

The meal started with the classic lomi soup.  Lomi, a thick soup made with chunky egg noodles, an assortment of seafood, and veg all cooked in rich pork broth, has always been one of my favorite dishes and my dad’s uncle prepares it to perfection whenever the old fellow can be coaxed into cooking.  But since Sangko Gene rarely ever gets to cook the stuff anymore (and I’m not at all that fond of the instant variety), Savory’s version works as well.  You get a wealth of fat noodles cooked in a brown soup that’s so thick it could pass for gravy.  The taste is shrimp-y but without the off-putting fishiness that steers most people away from the dish.  Plus, it’s chock-full of diced pork, fish balls, shredded Savoy cabbage, and quartered shiitake mushrooms to add textural and flavor interest. 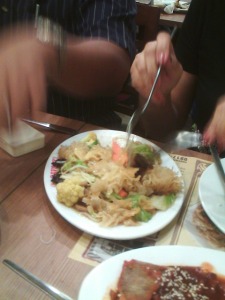 If you’re the sort of family that needs a plateful of veg at every meal, I recommend the lo han chai.  What you get is a savory and satisfying mix of green beans, mung bean sprouts, cabbage, wood-ear fungi, button mushrooms, shiitake mushrooms, and fluffy golden fungi that are crisp to the bite and are most flavorful.

The pork asado (char siu) is red-cooked and smothered with a sweetish-smoky sauce.  I’ve had better versions of this, but my mom and sister are both asado-fiends so we had to have a good dose of red-cooked pork. 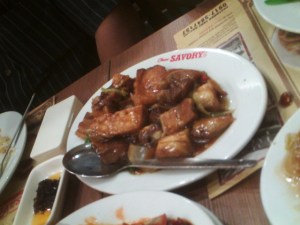 One of my mom’s favorite dim sum items is a dish of spareribs cooked in tausi (salted black beans) and Savory has a reasonable facsimile thereof on its menu.  Lechon con tofu tausi approximates the classic sparerib dish by smothering chunks of lechon Macao (lechong kawali – deep-fried pork belly) in a thick, sticky black bean sauce together with slivered leeks and deep-fried chunks of cottony tofu (cotton-style [momengoshi] tofu).  It is a great dish with a distinct umami quality to the flavors and it’s fab with plain rice.  Truth be told, I’d order and eat this again and again.

Chinese food purists would do well to flee the localized fare at Savory, but hard-core gourmands like me and my family would never turn our noses up at this classic comeback. 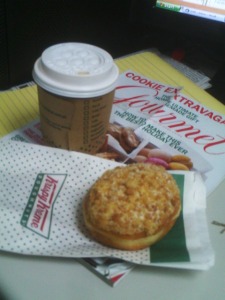 Breakfast: coffee, a doughnut, and a back issue of "Gourmet"

Admittedly, I’m not a doughnut person.  Despite the fact that I do fry up batches of doughnuts at home, I’m not really in the habit of munching them.  (I leave that to my mom and sister.)  But there are days in a woman’s life when only caffeine and sweet fried dough will do to perk one up in the morning.

It just so happened that one of those days coincided with the opening of Krispy Kreme‘s Valero branch yesterday.  And so, I ended up with a small Kaffe Kreme (cafe au lait with a touch of doughnut-ty syrup) and a lemon cheesecake doughnut.

If, like me, you don’t like your sinkers too sweet, the lemon cheesecake is a good choice.  Despite the heavy shower of crumby brown-sugar streusel on top, it isn’t very sweet.  Plus, the creamy, gooey sugared cream cheese center is lightened up by the sharp, citrusy tang of what appears to be a fairly good smoosh of lemon curd.  (And, hell yes: I love lemon curd!)

It’s a tad pricey, so I don’t recommend it for a daily morning nosh.  But on those days when only coffee and a doughnut can save you, it’s worth it.

A little over a week ago, I found myself in the kitchen melting down Ivory Coast and Indonesian single origin chocolates with some rum and cream while thinking about various events that have punctuated the last couple of years.  While stirring the fragrant, creamy mass, I thought about the “friend” (whose status in my life has now been reduced to “acquaintance”) who told me to forget all about a certain someone because she believed that he had no place in my life.  She said I deserved better.  She said he was just a kid and all I’d get from him in the long run was aggravation.

And it sure wasn’t that “friend” who told me off – then made matters worse by blabbing my feelings to her best friend.  They both considered me weird for caring about a boy whom they thought silly and childish and not worth considering seriously.

Well – and I rarely every say this – to hell with them both!  Both of them may be married, but I doubt if they know what devotion and inspiration look like.

But going back to the pot of chocolate and cream that was slowly transforming into a gorgeously unctuous ganache, I thought about the boy who has inspired me to return to writing poetry, the one who has driven me to take stock of my life and make changes that – so far – have proven to be the right ones.

Wayne – the adorable Mr. W of posts past – is one guy who I think is truly underrated, even underestimated by the people around him.  All people seem to see is a tall, pale-skinned, somewhat gangly young man.  I, on the other hand, see a diamond in the rough.  Of course, people tell me that I’m being fanciful, but that’s my opinion; everyone else can shut up and get lost, for all I care.

As I poured the finished ganache into a container for chilling, I considered the ingredients I used for it.  Ivory Coast is the most commonly used chocolate for commercial bars and the taste is classically chocolatey but not at all that remarkable.  Indonesian chocolate, on the other hand, is considered inferior and bland.  However, it’s amazing what the application of heat and the mixing in of rich rum and pure cream can do to these chocolates.  My ganache was rich, fragrant, full-bodied; the flavors nuttily bold yet gloriously smooth.

Later on, once the ganache was chilled till solid, I took out my tub of ground almonds, rolling lumps of the frozen chocolate paste in it to make truffles that seem to have played in a snowdrift.  Those of you who are connected to me via Facebook know that I named these little treats Truffle W – after the young man whose merest acquaintance actually brought back a spark in my life that I thought long extinguished by so many disappointments: the spark of creativity, of inspiration.

I sank my teeth into a truffle and marveled at its contradictions.  Rich, but not too cloying; crisp almond balancing almost chewy chocolate.  A smooth, dark bitterness balanced by a nutty sweetness.

I savored my truffles and thought about the man I named them after – and smiled, and wished I could actually share them with him.