It all started with a fragrant whiff of basil, mint, and cilantro from a rather unassuming stall inside the recently-opened Galleon Food Avenue along Paseo de Roxas.  I was on my way to the dumpling stand to grab a double-dumpling lunch on nasi lemak with garlic and ikan bilis (more on that one of these days) when that gloriously unexpected confluence of scents stopped me in my tracks.

When I turned to get a better look, I saw that the stall sold Thai-style noodles.  At the time, however, I wasn’t in a noodle-y mood so the beguiling tangles of rice noodle and mung bean sprout didn’t seem so appealing.  Instead, I perked up when I saw that Thai iced tea (P 35.00 [US$ 0.77] for a 12-ounce glass) was on their menu.

Known as cha yen, this heady brew is made with tea leaves steeped with star anise which gives it a somewhat spicy taste with a licorice-like undertone that is most pleasant given the tropical weather.  While a bit of sugar goes into the brew, much of the drink’s sweetness comes from a swirl of sweetened condensed milk.  In this particular case, the brewed tea is pre-sweetened and is made creamy by a most generous spill of evaporated milk.  The end result is less sweet than the Siamese original, but is certainly appealing and refreshing. 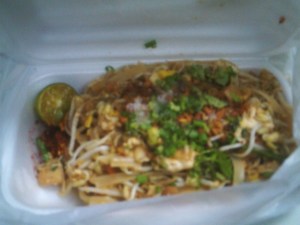 Anyway, the stall’s name is Thai Mien and, as stated above, it specializes in kuitiaw naam (Thai noodle soup) which can be left plain or embellished with such add-ons as braised chunks of fatty beef, dumplings, or spongy but flavorful meatballs.  While the smell of the broth is absolutely tempting, I’m still not in the mood to sample it just to compare it with that of Sen Lek‘s.  That said, the next day’s noodle lunch was a fried one: a generous helping of pad Thai.

Pad Thai is actually the short form of kway teow pad Thai or noodles stir-fried in the Thai manner.  Its full name is a dead giveaway as to its origins as a dish brought to Thailand by Chinese immigrants as far back as the time that the Silk Road was an active trade route.  Its most basic components are, quite obviously, flat rice noodles sauteed in a wok with a bit of peanut oil, some garlic, scallions, and a hint of cilantro.

According to Alexandra Greeley‘s article Finding Pad Thai in the Winter 2009 issue of Gastronomica, pad Thai in the modern context calls for the addition of shrimp, various meats, mung bean sprouts, and onions to turn the basic fried noodles into a substantial meal.  In the case of Thai Mien’s pad Thai, they certainly don’t scrimp on the noodles or any of the other ingredients as you get healthy amounts of diced meatball, scrambled eggs, sprouts, scallions, and torn bits of basil and cilantro to add zing to the dish.  Not a bad deal for P 70.00 (US$ 1.55) as each polystyrene box can easily serve two regular office gals (or one famished workaholic) in one go.

What you get is a flavorful melange of flavors and textures.  The crushed peanuts, scallions, and sprouts give crunchy counterpoint to the chewy noodles and the soft egg.  The addition of nam pla (patis – fish sauce), hibe (tiny dried and salted shrimp) adds a pleasant level of saltiness while the basil and a hint of sugar tempers the fiery hit of crushed and dried chilies and the sharpness of cilantro.  A bit of kalamansi squeezed over the dish before eating adds a tartness that seems to let the cereal-y flavor of the noodles pop.  Best of all, it isn’t very greasy and there isn’t a bit of the dried pineapple that puts many people off from eating pad Thai.

I confess that I’ve never been to Thailand despite the fact that I’ve sampled that nation’s cuisine extensively.  And, no, it hasn’t helped that Mr. W posted snapshots of his trip to Thailand yesterday – and this has rendered me green with envy.  But I carry my boxed order of pad Thai back to the office, taking small sips from my plastic cup of cha yen on the short walk back, and smile to myself.  I don’t know if I’ll be able to go to the land of silks and regal elephants any time soon, but each bite and each sip of my meal will transport me there even for a short while.