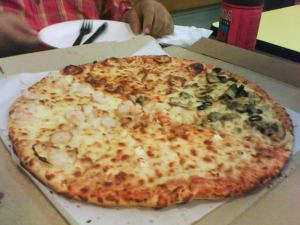 I’ve stated time and again on this blog that mine is a family that likes – no, loves – to eat.  However, there are so many great things to nosh on these days, there are so many choices that it practically takes forever to decide on what to eat.  It’s a good thing that there are places that mash things up so you get a little bit of everything to try.

Case in point: Yellow Cab Pizza‘s Four Seasons.  What you get is a pie that includes four of YCP’s most popular flavors: the pepperoni-studded NY Classic, #4 cheese (which, as it’s name clearly states, involves four cheeses), roasted garlic and shrimp where the little crustaceans are deliciously crisp-tender and sweet and the garlic is deliciously mellow, and – one of my personal favorites – the anchovy lovers with anchovies, capers, and olives.  Perfect for indecisive appetites!

One thing you should definitely order along with a Four Seasons pizza is a box of Fleet Starters.  Practically a meal in itself for two, this selection of appetizers can actually satisfy four hearty appetites as it consists of spicy chicken wings, peppery baked potato wedges, and a huge mound of tortilla chips.  A tub each of salsa and blue cheese dressing also comes along for the ride.

Truth be told, when the box arrived at the table, we were all staring at it in consternation as we couldn’t find the potato wedges!  After a good deal of rummaging and chip-munching, however… 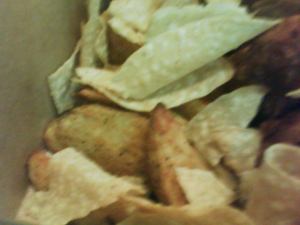 …they were at the very bottom of the box!

Incidentally, I think regular sodas aren’t the best thing to go with a meal like this.  You’re better off with a ginger ale (always a personal preference!) or a bottled iced tea (check out Sola in either peach or raspberry!); if you’re legal, a Cerveza Negra‘s always nice.  😉 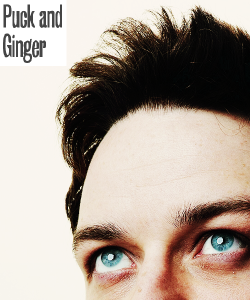 It's the project that's taken up the bulk of my free time...

I apologize for dropping off the food-blog radar for over a week now.  It’s just that Puck and Ginger, my current novel-in-progress, ended up moving at a much faster clip than I expected.  Lots of love to everyone who has read it so far and I hope other SybDive readers will check it out, as well.  😉

I’ve been rather peckish of late, thanks to all the writing both for work and on the novel, so my appetite’s been rather poorly.  Not a good thing in a food blogger, alas, but it does happen.

It was during this rather peckish period that I actually subsisted on a few things that may probably surprise you (or not, of course!).  These were ice cream, iced coffee, and that rather fetching dark chocolate and peanut butter milkshake I’d always wanted to try but never really had the time for. 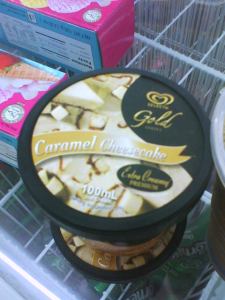 A new offering from the Selecta Gold Series, Selecta’s caramel cheesecake ice cream was developed by Annie Tanco, the woman behind Bizu Patisserie, my favorite source of macarons, mendiants, and other French niceties.

According to the blurb on the side of the cup, it’s supposed to be a rich cheesecake ice cream with caramel swirls and chunks of cinnamon-flavored graham cracker crust.  Admittedly, it’s quite rich, creamy, and melts almost instantly in one’s mouth.  However, two or three spoonfuls into it, I had to wonder where the cheesecake element was.  The caramel and cinnamon kind of overpower any hint of cream cheese.  Nice flavors, only my brain kept screaming, “Where’s the cheesecake?”

Along with the ice cream, I also got a tumbler of 7-11‘s iced cappucino.  Tastes like a chilled instant three-in-one coffee, to be honest about it, but it does kill one’s caffeine cravings so I didn’t complain. 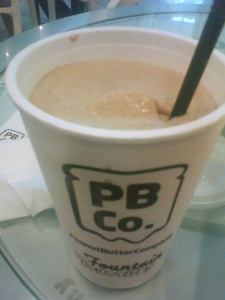 This milkshake brings all the folks to the yard...

As for the milkshake, It was one of the best I’ve had in ages.  Peanut Butter Company’s dark chocolate peanut butter was whirled up with scoops of vanilla ice cream and chilled full-fat milk for this particular treat.  Thick and luscious, it tasted like chunks of Choc-nut (cocoa and peanut candy) were whipped into the drink.  Not so sweet, but it worked like a meal in itself: rich and certainly satisfying.

Well, it’s back to work for moi.  I just hope y’all can take the time to check out Puck and Ginger one of these days.  Five chapters are already up (the most recent chapter – L’Entree – can be read here) and Chapter Six – The Main Course – goes online this week!  😀 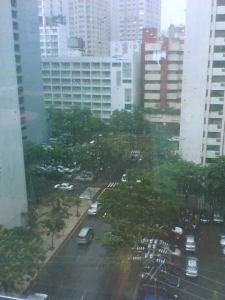 Makati in the morning...

The weather continues windy, chilly, and stormy in this part of the world.  While it’s the sort of weather that pretty much shoots commuting to hell and then some, it has its compensations.

For one thing, it’s quite conducive for naps and snuggling against something – or someone – cuddly.  (Lucky you if you have the latter!)  For another, it brings out the sort of food I really enjoy: thick soups, substantial stews, and porridge in both sweet and savory forms. 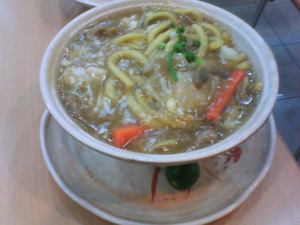 Lomi, that thick, rich, seafood-based noodle soup, has long been one of my favorite rainy-day treats.  Traditionally, lomi is made with a seafood stock: fish bones, prawn heads, along with crab shells and cracked crab claws or lobster tails are simmered with salt, pepper, bay leaves, ginger, and garlic until all the flavor has been leached into the liquid.  The resulting stock is then simmered down until it’s thick and the flavors have been concentrated into an umami explosion.

The stock is then thickened further with the addition of a beaten egg.  (The principle is similar to egg-drop soup.)  Thick, chewy miki noodles are dropped into the thickened broth along with finely shredded Savoy cabbage, carrots, and scallions.  In many homes, particularly in Central Luzon, chicken gizzards and livers are added along with small shelled prawns, shredded chicken breast meat, slivers of fatty pork, and quartered fish balls.  Those who want to swank the soup up also add hard-boiled quail eggs or sliced century eggs before serving.

Lomi is something I rarely have at home, seeing how my mother is allergic to most of its components and she can’t abide its rather fishy aroma.  Once in a while, however, my paternal great-uncle can be persuaded to whip up a steaming cauldron full of this ambrosial delicacy.  Most of the time, though, I have to get my fix at a restaurant.  It may not be as homespun or as chunky as a homemade bowl of good stuff, it’s still better than nothing.

Other people will choose chocolatey champorado or a savory arroz caldo made yellow with ginger and kasubha (native saffron) to satisfy rainy-day cravings.  Others will go for the laissez les bon temps rouler vibe of Chinese congee with a veritable buffet of add-ons.  And there are people like me who relish the idea of curling up in a cozy spot with a ginormous bowl of noodle soup.  Really, is there really any better treat on a rainy day?  🙂 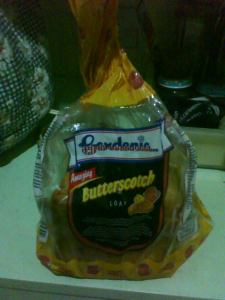 I was rummaging through the fridge last week and found a rather unusual half-loaf of bread on one of the shelves.  Spotting the Gardenia brand, I first assumed that it was the rather popular Black Forest loaf or, at the very least, the Choc-ripple/Mocha Marble twin-loaf.  On closer inspection, however, I was pretty gobsmacked to see it was neither of these favorites.  It was a totally new variant: butterscotch!

If that sounds completely bug-out mad to you, it gets a bit crazier.  The bread is a tad yellowish, made so by the addition of caramel and brown sugar as opposed to the usual white.  But while this gives the bread a lovely vanilla-ish aroma, it makes it just mildly sweet, not at all what I expected.

What does give this particular loaf serious sugar mileage are the little chunks of caramel candy scattered throughout the inside.  As a result, each slice is dotted all over with pockets of buttery, sugary sweetness.  Mercifully, toasting the bread actually doesn’t melt the candy enough to turn it soggy.  Instead, it melts just enough to be sticky and unctuous and disturbingly moreish. 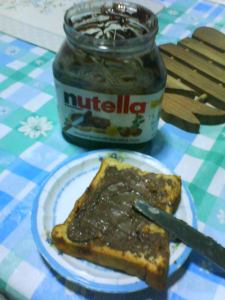 Nutella. Don't ask. Just do it.

Gardenia’s butterscotch loaf would probably make a better tea-time bread rather than something you’d nosh on for breakfast.

However, when you’re being silly the way I’ve been these past couple of weeks, it works a treat at the start of the day when toasted, slathered with Nutella (or some lesser gianduia), and topped with sliced bananas.  Nutty, sugary, fruity, seriously insane YUM.

Anyone up for salad?

I’m a regular sucker for avocados and I will actually go out of my way to hunt them down whenever they’re in season.  This year, unfortunately, putting in a lot more time for work and just about everything else has left me too tired to check out the fruitmongers’ stalls at my local fresh market.  It was a good thing I was able to snap up a couple avos last night and put them to fairly good use.

I’ve long been a fan of that gorgeously-flavored Mexican dip known as guacamole, but have never been able to sufficiently replicate it at home.  That said, the closest I’ve ever gotten to a bowl of guac’ at home is this salsa fresca I whipped up last night to go with a store-bought roast chicken.

It has loads of fresh flavor and contrasting textures that make it a great side for roasts or a fab relish to go into a bacon sandwich.  However which way you use it, be sure to get the freshest and ripest possible avocados for maximum savory-sweet smoothness for your salad.

Combine the diced avocado, onion, and tomato in a bowl; set aside.  Mix together the kalamansi or lime juice, minced parsley, and cilantro if you’re using it.  Drizzle the citrus-herb dressing evenly over the avocado mixture and season with salt and pepper to taste.  Toss with your hands before serving.