Bistek – usually flank or skirt steak cut in slices, but beef liver or pork tenderloin can also be used, and cooked in a mixture of soy sauce, kalamansi juice, and sliced onions – was one of the personal favorites of the late National Artist for Literature Nick Joaquin.  I can’t blame Ole Nick for liking the dish so much: when served piping hot with enough steamed plain rice to soak up the salty-tangy sauce and the sliced meat tender enough to cut with a spoon, it’s sheer heaven for anyone lucky enough to sit down to such a blessed meal.

It’s also the sort of meal that doesn’t really leave much in the way of leftovers because people eat it up so eagerly.  However, on those rare occasions when there is some bistek leftover in the fridge, it actually works as a filling for sandwiches.

I tried it out yesterday when, in a rather piggy fit, I craved for a sandwich.  I was thinking along the lines of a classic Philly cheesesteak – only I didn’t want any cheese at the moment, nor did I have any hoagie or hotdog buns in the fridge.  What I did have was an olive-studded whole-wheat foccacia (Village Gourmet‘s take on this Italian classic is excellent if you haven’t the time to bake your own – plus, it’s readily available at most large supermarkets.)  Easy-peasy: I just split the foccacia in half, layered leftover bistek slices (don’t forget to use the sauce-soaked onions for a bit of sweetness!) and heated it up for four minutes in a toaster oven.  Slices of sweet-sour cucumber salad (fresh cucumber slices soaked in a mix of sugar, vinegar, and cracked black pepper) gave my sarnie some crunch and zing.

It makes a hefty meal for one, but is much more satisfying when shared with one’s mother with frosty glasses of iced tea on the side.  😉 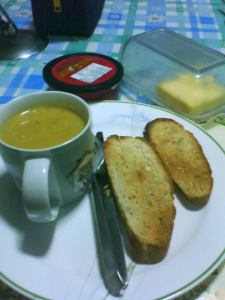 A rather rustic breakfast...

When I was a kid, one of the first full-length animated films I saw on home video (yes, it was on Betamax at the time) was Bon Voyage, Charlie Brown (And Don’t Come Back) which was rather charming enough on its own, but also made an impression on the budding foodie in me via the scene where Peppermint Patty was all askance at the breakfast served by their French host family: soup, bread, butter, a selection of cheeses, and milky coffee served in large, deep bowls.  I pretty much thought that it was really how the French started their day until I actually went to France a year later and learned that soup wasn’t part of the standard petit-dejeuner at all.  The bread, butter, and milky coffee, however, were all there.

Fast-forward to this morning: I wasn’t quite sure what to eat for breakfast, so I found myself staring sleepy-eyed at the stuff inside the fridge when a lightbulb seemed to pop on in my head.  I heated up a mugful of my homespun potage rustique (creamy potato-carrot soup), toasted a couple slices of whole-wheat bread which I later slicked up with lightly-salted butter and McLaren’s Aged Cheddar, and – given how the blasted weather’s gone humid again – made a rather localized and iced version of cafe au lait.

Paired with the soup, the cheese toasts were quite a treat and evoked the cheesy butter Anthony Bourdain waxed poetically about in his childhood memories of summers spent in France.  As for the iced cafe au lait – made rather special by the addition of pandan (screwpine) flavoring and a pinch of ground ginger – it was an invigorating and lovely way to start the day.

What a cute widdle octopus dumplin'!

Hongkong-style fried noodles topped with dumplings have been a popular snack in this part of the world for the past few years, what with little kiosks offering different variants of the dish on just about every street corner, train station, and food court.  While it’s pretty much the same thing – white wheat noodles stir-fried with mung bean sprouts and topped with pork siu mai – seasoning to taste is, of course, facilitated by tubs of various sauces on the counter.

Some of these kiosks offer a standard-sized paper bowl of noodles, while others offer bigger portions with twice as many dumplings.  And there are those that offer a bit of a twist by throwing a fried egg into the mix and including a Mexican-inspired salsa verde to the litany of sauces.

However, even those seriously addicted to this particular meal will start to wonder if there’s any way by which it could be improved or given a bit of a twist.  Lo and behold, Maru Maru – resident takoyaki and yakisoba stall at Glorietta 4’s Food Choices – went ahead and gave it some Japanese flavor. 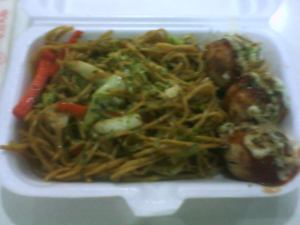 For P 85.00 (about US$ 2.00), you get a hefty helping of yakisoba with three takoyaki.  The noodles are stir-fried with a bit of soy sauce and sesame oil instead of being fried plain; carrots and shredded cabbage replace the usual bean sprouts and a dusting of nori finishes the dish.

The takoyaki are a bit on the small side, but they’re quite hefty with bits of real octopus and are made peppier than the usual octopus balls by the addition of benishoga (pickled pink ginger).  Paired with the noodles, it breathes new life into a popular meal-on-the-go. 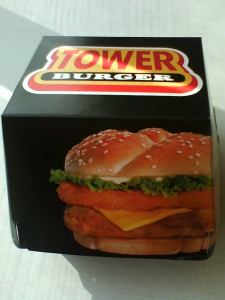 My officemates have babbled about it with more than a tinge of awe in their voices.  Some of my friends have uttered its name in hushed tones, some even sounding more than a little horrified by it.  My sister spoke of it somewhat wistfully after seeing an ad for it on television.  And me?  I was rendered more than a little speechless since it follows on the heels of another fast-food monstrosity from the same company.

This is KFC‘s Tower Burger, a somewhat ginormous sandwich straight out of Man v. Food host Adam Richman’s breakfast menu.  What’s in it?  A whole Original Recipe chicken fillet, cheese, lettuce, mayonnaise, and – dig this! – a hash brown.  Seriously, if KFC’s equally notorious Double-Down amped up the protein, this particular sarnie pumps up the carb-age.

Be afraid… Be VERY afraid…

It’s the sort of sandwich that doesn’t seem to skimp on anything: the chicken thigh fillet is pretty big, the hash brown is as big as a saucer, the kaiser roll used is pretty darned high.  There were two lettuce leaves in my sandwich (which is saying a lot because most fast-food floggers only send out one per sarnie), a large slice of cheese, and a generous swirl of mayo.

It’s pretty tasty as these things go: but, then again, anything other than a chicken breast tastes good to me.  (I can’t stand chicken breasts!).  Still, it strikes me as a non-spicy version of KFC’s signature sandwich, the Zinger, so I’m not sure if I’ll be buying this again anytime soon.  However, for those of you who want everything – salad, main, a side, plus the dinner roll – stuck in a sandwich to save time, this may be right up your alley. 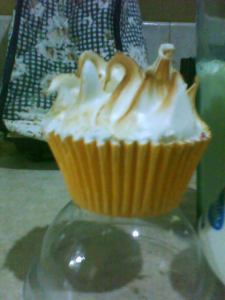 I have one particular guy friend who pretty much doubles as my evil fraternal twin despite the fact that we were born two and a half years and several hundred thousand miles apart.  I mentioned  Floyd in passing during the Aberdeen buttery rowie entry from a couple or so weeks ago as the Scots lad whom I asked if his local baker made butteries during the summer.  We met whilst discussing story concepts for a possible teleplay and have since grown to be fast friends and fellow foodies.

The past few weeks have been punctuated by round upon round of online one-upmanship sessions between us as we’ve been constantly trying to outdo each other with regard to home cooking, home baking, grocery finds, and local restaurants.  I’ve accused him of not playing fair as his lovely Missus lends him a hand while I have to do all my kitchen work alone.  On the other hand, he accuses me of not playing fair as I live and work in places where really good restaurants and specialty food shops are but a hop, skip, jump, or a phone call away.

So far, the battles have always ended in a draw and I supposed they would pretty much stay that way till a couple days ago when I was telling Floyd about CBD, a burger and cheesesteak joint over at the Ayala Triangle that serves superb sandwiches and has a rather ingenious way of serving desserts.

ME  They call it a Shake and Bake.

Floyd  Shake and Bake?  Isn’t that an American breading mix?

ME  Yeah, but in this case, it’s a cake blitzed into a milkshake.

ME  The rumor mill says so; I’ve not tried it myself though.  But I’ve a notion to spin it out at home.  😀

A cupcake, some ice cream, a glass of milk; looks like we're set...

That’s right: you toss a slice of cake, pie, or cheesecake (or a cupcake, single-serve cheesecake, or a small pie) into a blender along with the usual ingredients for a milkshake, blitz it into a liquid, pour it into a glass and enjoy it.  The idea was featured in Food Network Magazine a few months ago, too.

All that said, I went out and picked up a really lovely lemon meringue cupcake from Frostings (P 45.00 each – and they’re pretty big ones, too).  It’s a lush, moist, buttery, citrusy treat on its own as the cake is just yummy with tiny bits of lemon zest punctuating each bite and the lemon curd within and the crisp-tipped meringue on top make it utterly irresistible.  Tossed into a milkshake, however, I had my reservations: would it end up ludicrously sludgy and unappealing?

Thank goodness, my fears were unfounded when I tried it out this morning!  (Yes, I’m mad enough to have these things for breakfast!)  It all blended up into a gorgeously smooth drink with wee bits of lemon zest to keep it interesting.  Despite the sugar in the meringue, it wasn’t very sweet and the lemon flavor was balanced beautifully by the mild vanilla ice cream I used.

Floyd told me to send him pictures if it all worked out, including the one with the glass above: that glass devoid of everything save for some foamy smudges on the sides.  So as I am writing this particular blog entry, my evil twin is in a chat window in another tab plotting nefariously…

Floyd  The missus and I were thinking of tossing a slab of raspberry tart in with a few scoops o’ raspberry ripple ice cream an’ some strawberry milk.  3:)

ME  Hah!  My officemates and I were thinking of tossing in a slice of apple streusel pie with some caramel ice cream, a dab or two of homemade butterscotch, and full-fat milk.  (Pause.)  Plus a dusting of cinnamon on top. 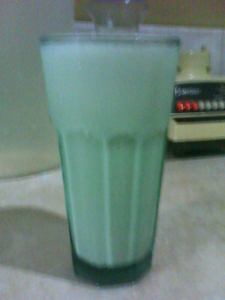 Shaken, not stirred: just like Mr. Bond likes his martinis...

Put all the ingredients together in a blender.  Cover and blend on maximum speed for 30 seconds.  (If using an Osterizer Pulse-matic blender, set on Liquefy.)  Drop speed to medium (Frappe on an Osterizer) and blend an additional 30 seconds.  Pour into a 16 oz. glass.  Serves 1.

Variations:  The banter between me and Floyd above should give you some ideas.  Plus, if you want a thicker shake, skip the ice cubes and add an additional scoop of ice cream.  Other combinations are as follows: