What do we have here?

On the walk from the office to the bus station at the end of every workday, I always pass by the Luxe kiosk near the Ayala Avenue entrance of Makati’s Glorietta.  This wee cakeshop has a rather fetching display of luxurious-looking (hence the name, I think) cakes and batches of neatly wrapped cookies looking like a regiment of soldiers standing in orderly attention.

Caramel cakes, rich chocolate tortes, and such niceties as English tea biscuits, Florentines, and these particular darlings – the St. Germain almond meringues – are certain to catch your eye.

Anyone up for these nutty biscuits?

What you get are crunchy, sweet cookies kissed with just enough cocoa to give it a smoky hint of chocolate.  It’s like nibbling classic Italian baci di dama (a similar meringue confection made with cocoa and ground hazelnuts).  These are lovely on their own, but I’ll bet they’ll be even more gorgeous with a cup of milky tea.

I’ve mentioned quite frequently here that I have long lamented the fact that ginger ale isn’t exactly the most popular carbonated bevvie in this particular part of the world.  This, in itself, is inexplicable given the popularity of salabat – a sweetened hot infusion of ginger-root in water – in both its traditional and modern [instant granulated and pre-sweetened] forms.

Whenever available, ginger ale (or its cloudier, spicier counterpart ginger beer) is rather pricey, sometimes going as high as P 65.00 for a bottle.  (That was how much a small bottle of Angus O’Neill ginger beer was the last time I checked.)  A local brand, MixMate, recently joined the fray – but, upon closer inspection, it was a fraud: there was utterly no real ginger in it, just a chemical flavoring substitute!

Luckily, just when I thought I was going to have to pawn an arm, a leg, and several other vital organs to get a regular supply of ginger ale, 7-11 stores began touting Aussie sipper Roots Ginger Brew in its chiller section.  This particular import from Down Under is a delicious little soda with real ginger infusion and has a great balance of sweetness to nose-nipping spiciness.

Roots is fan-bloody-tastic enough on its own, but I daresay it will go over well as a spicy counterpoint to dark rum served over ice in a classic Dark and Stormy cocktail.  Plus, I’m of the opinion that it would be gorgeous in an ice cream float if poured over frosty scoops of either mango or vanilla-almond ice creams.

Oh, and for all you ginger-lovin’ cheapskates out there (Aye, I am definitely one of you!), each bottle will set you back a measly P 21.00.  😉

Just a short post, but a sweet one for today: recently found Japanese-style cheesecakes at the bakery section of SM Makati‘s supermarket.

These none-too-sweet cakes go for P 35.00 each and are delectably toothsome.  Perhaps not as velvety as those from more sophisticated Japanese-run bakeries in the metro, but they’re still a treat.  (The cute Hello Kitty stamp on top is also an adorable bonus.)

Ampalaya – bitter-melon or amargoso in Spanish – has to be one of the most loathed vegetables in this part of the world.  It’s green (obviously), rather wrinkled in appearance whilst still on the vine, and is just atrociously bitter.  Small wonder, then, that it never made its way into the litany of vegetables mentioned in the Philippine nursery rhyme Bahay Kubo.

However, if and when prepared properly, ampalaya becomes a delicacy worthy of even the most sophisticated palates.  The trick is to drain out all the bitterness from the vegetable-fruit.  If that sounds rather daunting, it’s actually a simple process.  All you need to do is peel, seed, and julienne the bitter-melon.  Place the veg strips in a non-reactive bowl and toss them with rock salt.  Leave them be for about half-an-hour or so, then squeeze out the liquid and rinse the squeezed veg under running water.  Once patted dry with paper towels, the julienned bitter-melon is ready for use in stir-fries or for making pickles.

For most Filipino families, particularly those with Ilocano blood, ampalaya is a canon vegetable for classic pinakbet where its bitter flavor and crisp texture play off the tastes and textures of pumpkin, eggplant, okra, and sitaw (snake beans).  Other families opt to cook bitter-melons with sauteed beef strips and tausi (fermented salted black beans) for ampalaya con carne.

At our house, one of the best side dishes to go with savory adobo is a simple amargoso con huevos.  Influenced by a Chinese dish made by stir-frying tomatoes with chives and scrambled eggs, this dish involves sauteeing the salted and rinsed ampalaya with a sofrito of chopped onions, minced garlic, and diced tomatoes.  Beaten eggs are added as the bitter-melon becomes crisp-tender and are cooked just till large, soft curds form.  Best served immediately after cooking, the bitter-melon gains a bit of sweetness and the dish is just delicious with plain rice.

And, while market- / grocery-bought ampalaya works, bitter-melons you grow in your own yard taste much fresher, crisper, and tastier.  😉

Anyone up for a sausage roll?

The first time I encountered the term sausage roll was during the time I was reading Enid Blyton’s The Twins at St. Clare’s back when I was in fifth grade.  In one scene, one of the students managed to sneak her puppy into the dining hall.  Along with one of her classmates, the girl managed to demolish a whole platter of sausage rolls – by feeding them to her dog!

As the years passed, I learned that sausage rolls are certainly a treat fit for both men and beasts.  The first variants thereof involved cocktail franks wrapped in brioche dough.  As I grew older, though, I became smitten with the kind made with bulk sausage meat – a variation that was particularly excellent when made with proper sausage meat wrapped in the sort of puff pastry that bakes to a golden brown crisp. 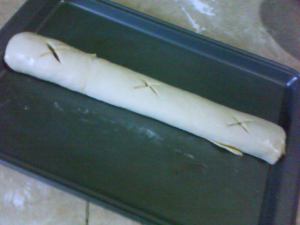 Neatly rolled up for baking...

Quite recently, I was able to get a packet of frozen puff pastry at my favorite supermarket and meant to use it for something along the lines of a proper steak and onion pie.  However, said pie turned out somewhat disastrously (though, in fairness, it did taste good), so my move to use just a bit of the pastry for it was a good move.

The remaining pastry finally came into good use this morning when a bit of inspiration prompted me to stuff it with mashed up Vienna sausages for a different sort of breakfast.  I am pleased to say that, unlike the pie, this particular dish came out quite well.  What I got was a delectably moist, savory interior surrounded by a crisp, golden crust on the outside and tender pastry within.

I am pretty sure that sausage roll purists out there will tell me off for using mashed Viennas for filling when bulk sausage meat (Italian sausage is best, though English banger-type sausages are more authentic) would be so much better.  However, I didn’t have any bulk sausage in the freezer at the time, so one simply has to make do with what’s on hand.  Fortunately, the end result was quite tasty.

Preheat oven to 350 degrees / Gas Mark 4.  In a bowl, mash the Vienna sausages.  Add the chopped onion and egg yolk.  Mix well and set aside.

Dust a clean, flat work surface and a rolling pin with the rice flour.  Roll the puff pastry out into a relatively even (or not) rectangle.  Working on the long side and leaving a small flap, spoon the sausage mixture into a log.  Fold the pastry flap over the sausage mixture and roll away from you, tucking in the sides.

Place the log on a non-stick cookie sheet or baking tray, seam-side down.  Slash a few vents on top of the roll to let the steam escape.  Put the tray on the middle rack of the oven and bake for 25 – 30 minutes till the surface is golden brown and crisp.

Remove from the oven and allow to cool for 3 – 5 minutes before slicing on the bias.

Serves 6 to 12 people depending on how thickly or thinly you’ve sliced the roll.  😉

May I also add that even a sausage roll as slapdash as this one is an excellent thing to pack into one’s lunch box (or tuck box) along with a bag of potato chips and a bottle of lemonade for a light yet satisfying meal on the go.