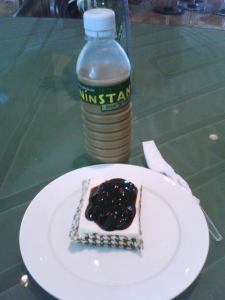 18 Days over at the Insular Life Corporate Center in Alabang is one of my favorite cafes despite the fact that it has very little in the way of either fancy coffee offerings or comfortable seating.  (The chairs and tables at this little part of the world are these magnificent wrought iron, wood, and glass confections that are lovely to behold but not very comfy to sit on especially if your backside isn’t as well-padded as mine.)

The cafe’s bottled iced coffee, the Ininstant, is made with the famed kapeng alamid (kopi luwak for all you global foodies) and it’s what I usually grab whenever I have meetings in that part of town and this bittersweet caffeinated sipper is a great thing to drink when you’re waiting for everyone else to arrive.  Normally, I get this along with a square of the cafe’s spot-on moist and rich chocolate cake for a rather posh breakfast.  Most recently, however, on seeing that the cake wasn’t available as yet (too early!), I grabbed something else.  Specifically, this wee treat: 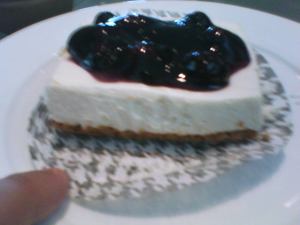 The blueberry cheese slice is, quite obviously, a blueberry cheesecake in miniature: a graham cracker crumb crust sits at the bottom and is topped with a thickish layer of sweetened yet tangy cream cheese.  A splodge of blueberry compote finishes each slice – and you can tell that each slice was splodged individually as opposed to the compote slathered over the surface of the tray before cutting.

As small as it looks, the slice is actually quite filling what with the richness of the cream cheese (the tang tells you that they used real cream cheese as opposed to the hideous gelatin-and-cream-bolstered foam that many commercial shops try to palm off on unwary diners) and the tightly-packed crumb crust.  Instead of a plain puree, the compote has whole blueberries and this little fact adds to one’s enjoyment.

Each slice costs P 60.00 and there are full cheesecake slices sold at P 90.00 each and are good for two.  However… 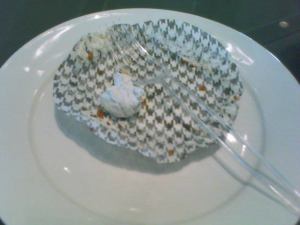 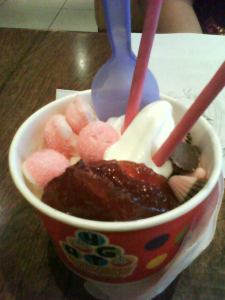 It's a strawberry overload!

Just a quick post: my sister ordered this at Teriyaki Boy when she hankered for dessert.

It’s called an Ichigo Yogato – literally “strawberry yogurt” and features tart frozen yogurt topped with runny strawberry jam, strawberry-flavored Meiji Apollo chocolate bonbons, strawberry marshmallow puffs, and two strawberry Pocky sticks.  Much as I do like strawberries, this one has just a bit too much of that scarlet fruit for my taste.

When I was in college, there was a small bakery at what would eventually grow to become the Alabang Town Center that sold a most delectable pastry filled with sweet crumbly-chewy marzipan, chocolate, and flaked almonds called a bear claw.  Alas for me and my mother, the bakery closed down a few years later.

Just after college, when Starbucks first opened in the Philippines at Makati’s 6750, I found bear claws again.  These were slightly different, though: sectioned puff pastry rolls filled with a sweetened pistachio mush and glazed with drizzled of white, sugary icing.  Not quite like the bear claws of my adolescence, but just as nice.  However, these weren’t popular among locals, so Starbucks took them off the menu a few years ago.

So, what’s a girl to do when she starts hankering for bear claws but there are no bakeries selling these ursine-named pastries?  Easy: head into the kitchen and start baking!

These homespun bear claws are a throwback to the ones made at that little bakery in Alabang two decades ago in that these are made with sweet yeast-raised dough rather than puff pastry.  As I didn’t have any marzipan on hand in the kitchen cupboards, I made do with Nutella instead.  But, with Christmas coming up, I just might try my hand at baking puff-pastry claws filled with sugary almond paste, buttery toasted almond flakes, and a generous drizzle of melted dark chocolate.

In the meantime, try baking them yourself.  😉

Sift together the flour and sugar into a large mixing bowl.  Mix in the yeast; set aside.

Put the milk and butter in a heatproof bowl and microwave on HIGH for a minute and 45 seconds.  Remove from microwave and whisk in the eggs and almond extract till well combined.

Make a well in the dry ingredients and pour in the milk mixture.  Mix with a wooden spoon till a shaggy mess is achieved.  Dust your hands with flour and knead the dough for 10 minutes.  Form into a ball and cover with a clean dishcloth; place in a warm, draft-free place and leave to rise for an hour.

Dust a clean surface and a rolling pin with flour.  Divide the dough into quarters.  Roll out one quarter into a rough rectangle.  Evenly spread 1 tablespoon of the Nutella on one side and roll up into a log.  Divide the log into four even pieces and make four cuts half-way into each portion, making sure to separate the loops as you arrange the rolls on a baking sheet.  Repeat with the remaining dough and Nutella.

Cover the finished rolls with a clean dishtowel and leave to prove for 15 – 20 minutes.  Brush the tops of the rolls with milk and bake for 20 – 23 minutes.  Allow to cool on the cookie sheets for a few minutes before serving.

Serve them plain or, better yet, slather some softened cream cheese on these babies for a really splendid breakfast.

Unlike, say, chicken, duck obviously isn’t the edible fowl of choice on many Filipino dinner tables.  Unless you live in places like Pateros, Malabon, or Valenzuela where balut (those nefarious duck eggs with fertilized embryos that constitute the worst gastronomic nightmares of many Western tourists) is the local cottage industry, it is highly doubtful that duck cooked in any manner will make it to your dinner table.  Unless, of course, you go to a Chinese restaurant that specializes in duck dishes.

Today, however, with the appearance of frozen whole ducks and ducklings in supermarket freezers for the Holidays, the possibility of serving duck to one’s family is no longer as remote as it used to be.  What really changes the game, however, is the arrival of The Classic Roast.

A fixture on the local Holiday bazaar circuit, The Classic Roast is the brainchild of entrepreneurs Denise Owyong and Polly Quizon.  Its primary stock in trade is Chinese-style roast duck (AKA Peking-style duck or siu ngap) served with plum and hoisin sauces either whole or in a few rather unconventional ways. 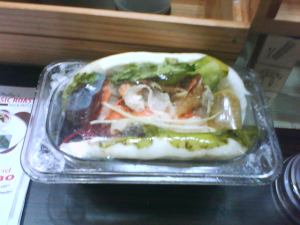 One can buy a whole duck for P 1,200.00 (US$ 27.61) and it will come with packets of plum sauce and hoisin.  It’s great for feeding a family of six or so; all you have to throw in are Chinese pancakes or flour tortillas or plain steamed rice plus some slivered cucumber and spring onions.  Half-ducks and quartered ducks are also available for smaller groups and they also serve bowls of carved duck meat over rice or noodles.

But what really grabbed my attention were the portable duck buns the stall had on display!

Cuapao, a sandwich made with a steamed mantou (white flour bun) split and filled with roast meat, pickled mustard greens, chopped roasted peanuts, and a sweetish sauce, has long been one of my favorite Chinoy snacks.  The Classic Roast puts a rich, deliciously swank twist on it by replacing the customary char siu (roast pork) with smoky, almost ham-like dark duck meat and a bit of the crisp skin.  Paired with fresh veg to add crunch and to lighten it up a bit, the duck cuapao (P 90.00) is a filling little sandwich that needs little embellishment and would best be paired with either a frosty-cold ginger ale or (for a more grown-up nosh) a chilled brown ale with a nutty taste. 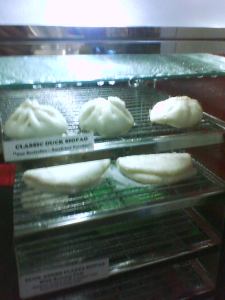 The duck siopao (P 45.00), on the other hand, makes for a smaller treat.  The rich duck meat is doused with classic Chinese asado sauce and mixed with a few carrots.  Salty, smoky, and sweet, it goes very well with the relative lightness of the white bun in which it is encased.

Incidentally, for those of you who want a different main course for your Christmas or New Year banquets at home, The Classic Roast is also open for orders which you can pick up at their outlets at Rustan’s Makati, Rockwell, and Katipunan. 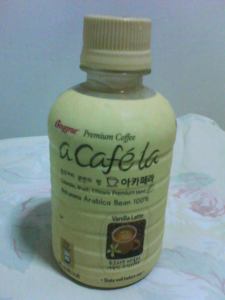 Up until recently, the Singaporeans, Taiwanese, and Japanese held court where bottled iced coffee was concerned.  While Starbucks and other Western brands are also available, the Asian players have ruled the roost on the strength of flavorful milky coffee at affordable prices.  Thus, it’s not surprising that South Korea would enter the fray via Binggrae a-Cafe-la.

Three of the five flavors posted on the website for this cheekily named caffeinated sipper are currently available at most big-city supermarkets: vanilla latte (shown above), caffe latte, and caramel macchiato.

Quite sweet, but not too much so, with the right balance of rich coffee and milk, these are great for stocking up in your home or office-pantry fridge for an invigorating sip on the go.