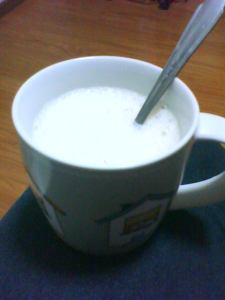 …have you ever tried a London Fog tea? It’s an Earl Grey with lots of milk and a big foam on top!

This was what Lorraine of Not Quite Nigella said when she commented on my recent post on the super-decadent milk tea I ordered over at Gong Cha.

Now, I’d be lying if I said that the London Fog didn’t pique my curiosity.  You know me: Earl Grey is my favorite tea blend and anything with even remotely British connections grabs my attention.

As it turns out, though, the London Fog is actually a Canadian concoction: it is said to have first been brewed in British Columbia and, essentially, that part of the world was first occupied by the Scots!  The only thing remotely English about the London Fog is the Earl Grey tea.  But, since when have I ever let myself be frazzled by these wee details?

A standard-issue London Fog consists of Earl Grey tea, steamed milk, and vanilla syrup.  Like a cappuccino, this particular drink is served with towering mound of milk froth on top, the end result of steaming the milk at a certain amount of pressure.  For the home drinker without either an espresso machine with a steam attachment or a standard-issue milk frother (mine gave up about a year ago), this may pose a wee dilemma.  But, again, since when has anything of this sort fazed me?

My take on the London Fog involves the same method used for making Japanese-style royal milk tea.  This involves heating the milk in a saucepan on a stovetop till it boils.  One then tosses in a particularly fragrant Earl Grey teabag and leaves it in to steep for a good three minutes (longer if you want it stronger); the creamy tea is then whisked till gloriously frothy before serving.

Frankly speaking, I love it.  You get the beautiful citrus fragrance of bergamot and the smokiness of black tea beautifully tempered by creamy milk and flowery vanilla.  It is, in my opinion, the perfect drink to sip while reading a good book on a chilly night when the rain’s pouring out one’s window.

Combine the milk and water in a saucepan and bring to a brisk boil.  Drop in the teabag and leave to steep for 3 – 5 minutes.  Remove the teabag, making sure to squeeze out all the liquid out of it back into the saucepan.  Add the sugar and vanilla.  Whisk with an egg-beater till good and frothy; pour into a mug to serve.