What can possibly be on the menu this morning?

I’ve blogged about Brew-kus, that self-proclaimed “bev-wich shop” (Its primary stocks in trade are tea, coffee, and sandwiches, hence the title.), before when I raved about its almond milk tea and lime-coconut cookies.  I liked what I ordered so much that I just had to head over for a second visit: this time, to sample the shop’s much-talked about all-day breakfast sets.  Brew-kus’s all-day breakfast menu consists of griddlecakes, French toast, and omelets in several mouth-watering and eye-popping flavor combinations.

According to the cheerful waitress who took my order, the shop’s choco-banana pancakes are a perennial best-seller: an overwhelmingly generous stack of flapjacks layered with whipped cream, chocolate powder, sliced bananas, confectioner’s sugar, and a generous glob of what I assume to be Nutella.  As if that weren’t stupendous enough on its own, it also comes with a fried egg (!!) and a heap of cottage fries (diced potatoes sauteed with a bit of onion and cooked till crunchy on the outside and fluffy within).  The bananas Foster French toast is another winner: a humongous slab of French-toasted bread topped with caramelized bananas and whipped cream and served with an egg and cottage fries.  However, much as I’d have loved to indulge my sweet-tooth so early in the day, I needed something substantial that wouldn’t make my energy crash come midday.

Brew-kus’ Ranchero Omelet was what I ended up ordering and it looked quite a treat.  The name is something of a dead-giveaway as to how hearty this particular omelet is: sturdy and satisfying enough to get you ready for a day riding out in the pampas herding cattle or sheep!  (Or if, alas, you’re just another urban warrior like me, it sets you up for another hectic day going over paperwork at your office desk!)  The omelet comes with toast along with another carb of choice.  Here, I chose cottage fries (listed as hash browns on the menu, FYI) over steamed rice – quite a happy choice, as a matter of fact. 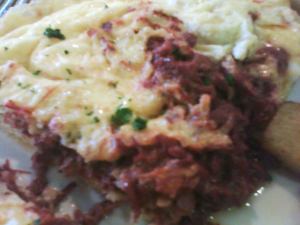 Look at all that corned beef in there~!

But this is no namby-pamby omelet: we are talking about some serious heft here!  This particular flipped-egg concoction is thicker than the kind offered in many all-day breakfast combinations.  And, when Brew-kus says their omelet is filled with corned beef, it’s definitely filled with corned beef!  The corned beef used in the Ranchero isn’t just the regular sort of beef hash you get from a supermarket tin, either.  You don’t just get shreds of it: you get large, beefy-rich chunks of the stuff, sheer bovine goodness.  Plus, if the corned beef did come from a tin, I suspect that it’s the premium sort as it was beautifully spiced with hints of paprika and black pepper, both of which added a pleasant heat to the finished dish.  Hash browns are a must-have here; though I guess you can ask if you can have the spuds and replace the toast with rice.

And, to wash it all down: a frosty-cold English milk tea latte at 50% sweetness.  Ahh, what a way to start the day…  😀