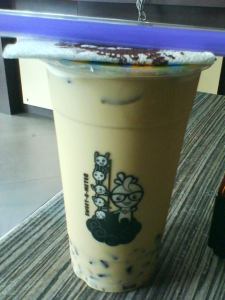 Hidden away in Times Square over at the Pacific Star on the corner of Sen. Gil Puyat and Makati Avenue is a tiny milk-tea kiosk that adds a whole lot of cute to the craze.

Cobo Milk Tea and Snow Ice is a Taiwanese franchise that first hit the scene in Quezon City’s Tomas Morato area, known for being a Mecca of sorts for local foodies.  As the name suggests, it specializes in both hot and chilled milk teas, cold tea infusions, and those snowflake-textured sorbets that have become popular in many Chinese communities.

Unlike the more staid and bespoke Gong Cha or the somewhat homespun Chatime, Cobo gives a more playful twist to the milk tea biz, putting its eponymous, bespectacled mascot everywhere from cups to cup-lids.  The packaging, decor, and presentation are just as quirky: menu items are played up with perky fonts while surfaces are emblazoned with bright, colorful shapes and patterns.

While the visuals are appealing enough on their own, the real proof of the pudding is still in the eating (or, in this case, drinking).  Cobo, thankfully, is no slouch where its products are concerned.

It is relatively easy to be yanked into buying the same thing over and over again, as seen in the many customers buying such milk-teashop no-brainers as taro milk tea, green tea with a salt- or cheese-infused whipped cream on top, wintermelon tea (whose appeal I cannot understand; I can’t stand the stuff!), or even iced coffee smoothies.  But the thing about trying out new shops is to see what sets them apart from the competition: and, in this case, Cobo pretty much scored with its black sugar milk tea.

If you’re a fan of either caramel or butterscotch, you’ll love this.  Sweetened with a dark sugar syrup (almost like molasses, I should think), this has a deeper, smokier taste than most commercial milk teas.  Plus, it doesn’t leave you with a serious sugar jag, the sort of energy crash you end up with whenever you consumer white sugar.  The waitstaff will recommend that you pair this with either coffee jelly (!) or egg pudding (always a nice choice), but tell them you’ll amp up your caramel vibe with the caramel chewdle (caramel-infused konyakku [conjac] jelly); it really makes it more interesting.

Another treat is Cobo’s take on royal milk tea (labeled in the menu as royale milk tea) which is perfectly rich, creamy, and goes strangely well with coffee jelly.  If you’re more of a milk tea purist, this one’s got your number.