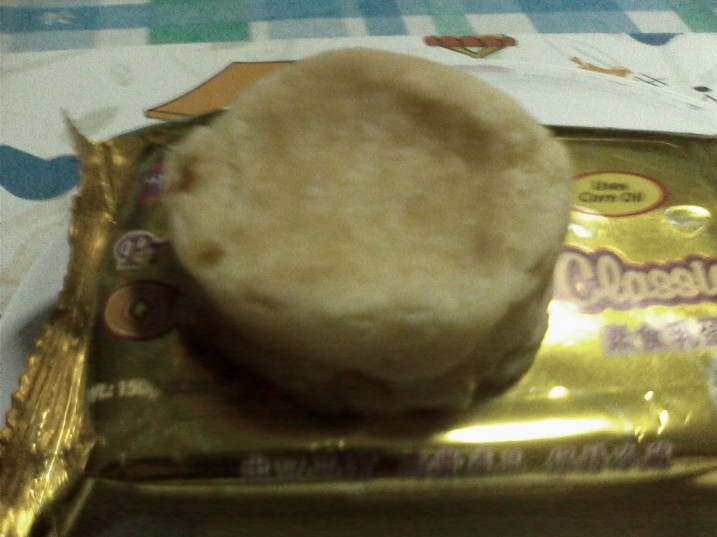 Not exactly your average hopia…

It’s one of the most underrated yet seriously craved for snacks in this part of the world: flattish cakes made of flaky pastry encasing things like sweet bean paste or yam paste and cooked on a flat griddle till browned on both sides.  This is hopia, a small, sweet cake that has been popular as a snack in Southeast Asia since the beginning of the 20th Century when Chinese immigrants from Fujian province devised the pastry as an alternative to heavier rice cakes and dumplings to go with tea.

Chinese-Filipino bakery Eng Bee Tin, the shop with the ubiquitous purple facade (even their mall stalls are a deep purple!), has been selling hopia in virtually all its delicious variants for much longer than even my folks can remember.  You have your classic sweet white mung bean (monggo) paste-filled discs, those filled with purple yam [ube], the slightly savory kind made with scallions, candied wintermelon, and pork fat (hopia baboy), and even the cuboid sort with the doughier skins cooked on a buttered griddle (dice hopia).  And now, to push the envelope further, they are offering custard-filled hopia. 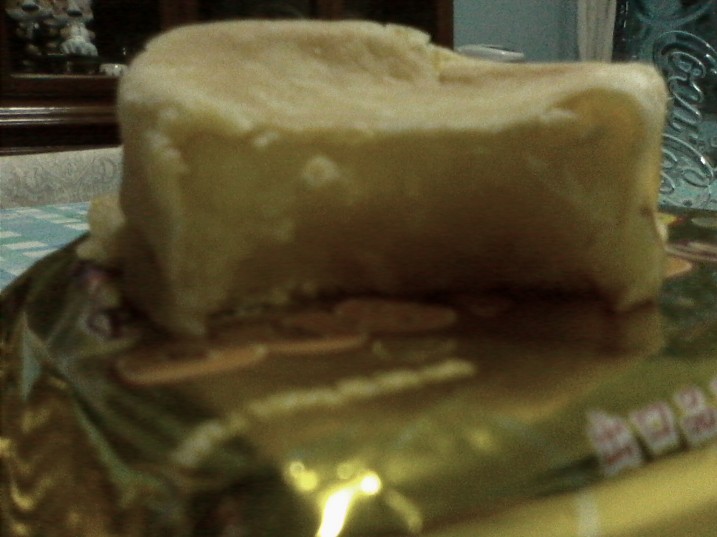 I kid you not; there’s practically a whole single-serve leche flan in there…

Referred to as the Classic Custard Hopia, this particular cake features the classic flaky lard-pastry surface but features a deliciously creamy and rich creme patisserie within.  (It would really have to be the creme rather than a true cream-based custard because it wouldn’t hold up at room temperature.)  The filling is eggy and melts smoothly in one’s mouth, going beautifully with the slightly salty taste of the pastry encasing it.  At P 48.00 – 50.00 a pack (depending on where you get it), I consider it something of an everyday indulgence.  🙂

Oh, and check out the add.  It claims that chilling custard hopia is bound to give you the chills because it tastes so gosh-darned good… 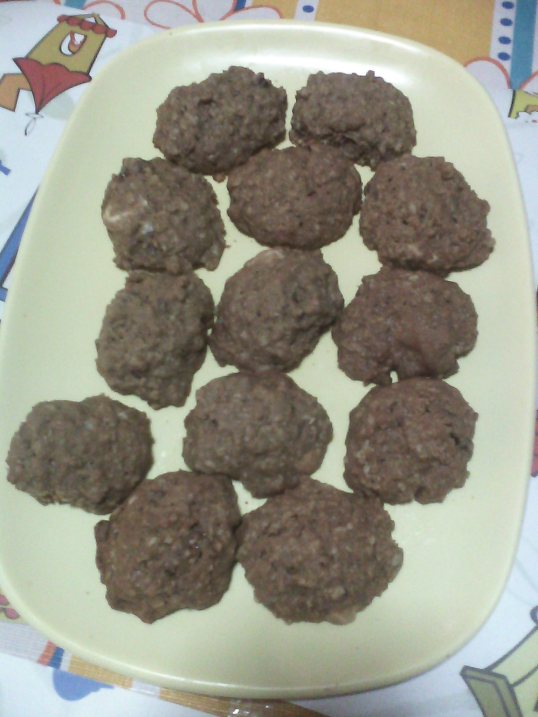 These babies have everything save for the kitchen sink

It’s been a regular roller-coaster of a week.  There was a long-anticipated (worried about, nails nibbled and all) bit of good news on Monday, followed by an uncle’s hospitalization (alas!), the usual grumps and groans about work and life in general, and waking up aching all over yesterday.  (Thank goodness for ibuprofen and ginger-infused liniment!)  Keeping all that in mind, I was still grateful for the little blessings that came my way this week and decided to give several people who made it bearable a small treat.

These particular cookies are Kitchen Sinkers – so named because they have practically everything save for the proverbial kitchen sink!  These are gloriously crisp on the outside, chewy within, and have a wholesome and delicious selection of goodies packed into them.  By goodies, I mean a selection of oatmeal, a mixture of fruit and nuts (like a trail mix), as well as chunks of white and milk chocolate.  For this, I actually used Mrs. May’s Fruit and Nut Toppers in blueberry-almond which features a combination of almonds, sesame seeds, cranberries, blueberries; great for snacking on its own, but also perfect for baking.  (I added some to last Christmas’s baby bundt cakes to scrumptious effect.)

These are hearty and satisfying little bites and go together very well with either cold milk or steamed milk with a shot of amaretto or rose syrup thrown in.  Try them yourself; you won’t regret it.  😉

Preheat your oven to 350 degrees / Gas Mark 4.  Line standard-sized cookie sheets with either waxed paper or baking parchment; barring that, you could also use Silpat liners.

Cream together the butter and sugars till light and fluffy.  Whisk in the eggs, vanilla, and baking soda.  Add the flour and the oats and mix well until a soft dough is formed.  Mix in the fruit and nut mix and the chopped chocolates until well-combined.

Scoop level tablespoons of the dough onto the prepared cookie sheets and chill in the fridge for 10 – 15 minutes.

Bake the cookies for 18 to 20 minutes, just to crisp up the outsides.  Remove from oven and leave to cool for about ten seconds on the sheets before transferring to a wire rack to cool completely. 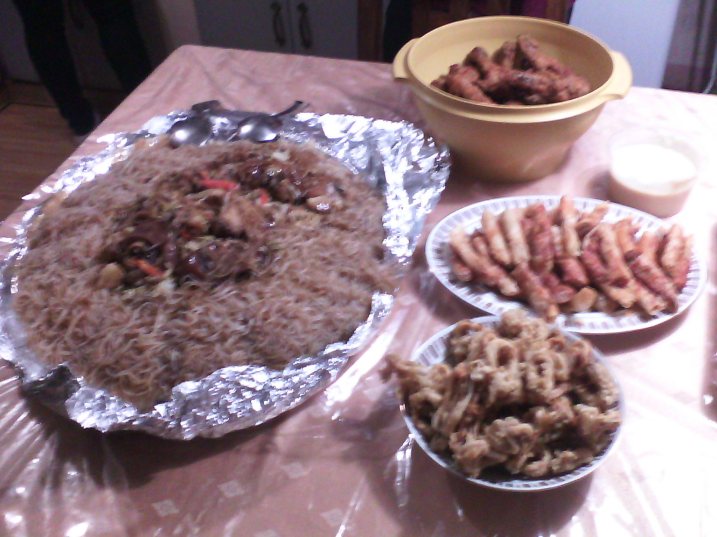 All ready for feasting…

There are two specific dishes that I’ve never really been a fan of: pancit bihon (thin rice noodles sauteed with pork and vegetables) and paksiw na pata (also known as humba; slow-cooked pork leg in soy, vinegar, and fermented black bean sauce).  This is not to say that I loathe them; I actually like them.  However, if given a choice, I wouldn’t exactly order them and go for something else.  In the case of the pata, I would prefer that it be cooked pata tim style, which is to say that it was braised in soy sauce with baby bok choy and plenty of mushrooms.  As for the pancit, I’ll stick to the thicker noodled pancit Canton or go for the more flavorful palabok.

This is why I was pretty gobsmacked when my sister turned us all on to a delightful concoction known very simply as pata-bihon. 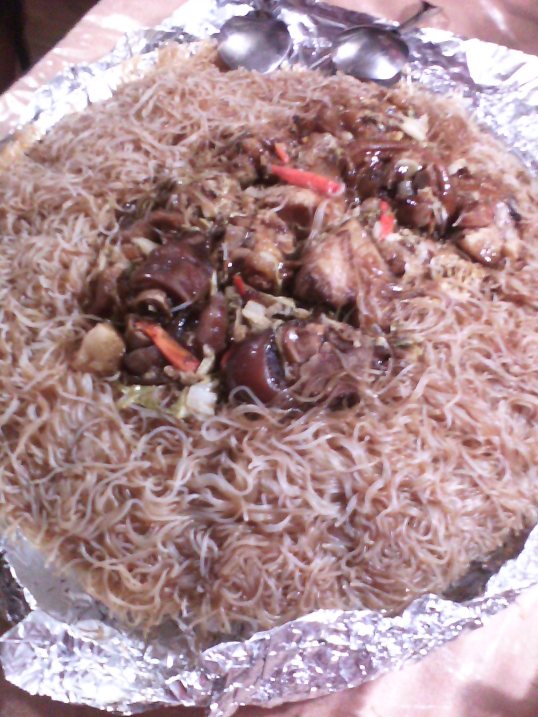 Pata-bihon is a specialty of a little hole in the wall named Tito Rom Capitol Restaurant which claims to have been feeding the masses since the 1940s.  It is, essentially, a panciteria – a restaurant that specifically deals with noodle-based dishes, mostly stir-fried and braised noodles to be exact.

It is a culinary marvel, really: rice noodles doused with braised pork leg and embellished with bits of cabbage and carrot.  The idea is to toss the noodles with the pork leg and its sauce very thoroughly prior to serving.  Served thus, you get a smoky, slightly sweet dish with a properly unctuous, even sticky texture.  The noodles absorb the flavors of the sauce beautifully and are just plain tender to the bite.  The pork leg has been slow-cooked till the meat literally falls off the bones and the fat and skin become gorgeously melty, even creamy.

Seriously, it’s the sort of dish that can give vegetarians, noodle purists, and health buffs some serious nightmares.  But when something this interesting tastes incredibly good, I say stuff the lot of them and enjoy the dish in all its saucy, meaty glory.  😀 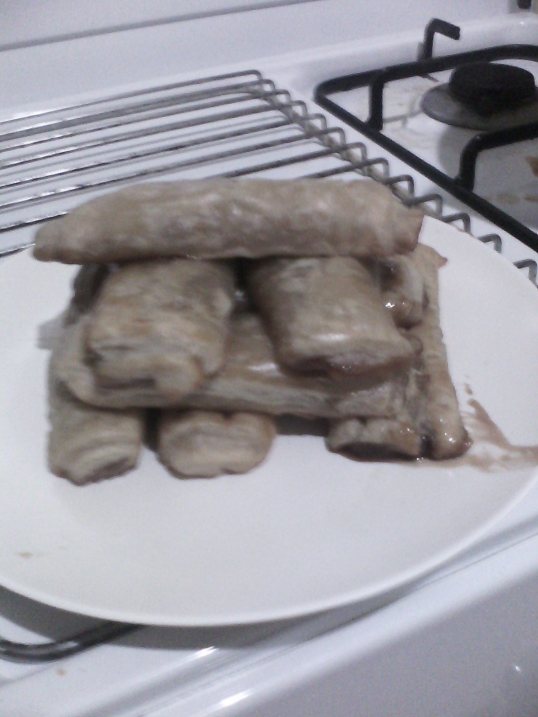 With the chilly weather we’ve been having of late, I got hit with the idea of making a dessert I’d seen on Honest Cooking for a South American dessert called canones de guayaba.  These are delicious little pastries made with shortcrust dough and stuffed with guava paste and, sometimes, a small slice of white queso fresco (fresh farmer’s cheese).

The original recipe calls for making the crust from scratch and using guava paste, a sweet and tart combination of guavas and sugar similar to pasta de membrillo (quince paste).  I didn’t quite have enough energy to whip up any dough from scratch, but I did have pre-cut squares of puff pastry on hand.  I couldn’t find pasta de guayaba, but I was able to find some good guava jelly as well as cream cheese to use in place of the queso fresco.

The end result: buttery logs oozing with sweet-tart guava jelly and tempered with a slight saltiness from the creamy cheese.  While these weren’t perfect – I’d hoped that these would be flakier – these were just the thing to go with a cup of sweet, milky tea on a cold, rainy afternoon. 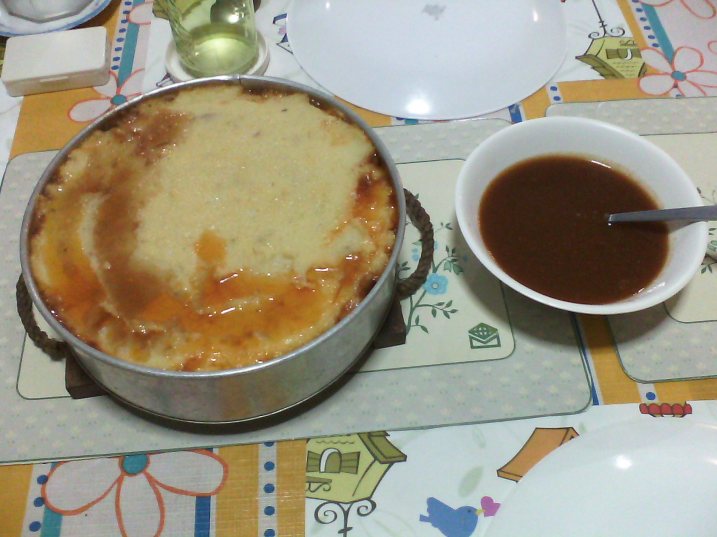 Considering how I was born and raised in the tropics, hot weather has never agreed with me.  Cold days, however, put a smile on my face and a spring in my step.  Contrary to prevailing medical wisdom, I have less depressive episodes in cold weather and my spirits start to sink when the temperature rises.  I have a tendency to write more in cold weather and I am much calmer, more balanced when Siberian breezes blow into the country.

That said, it isn’t surprising that I like cooking cold-weather food.  I know it sounds weird, but I take great pleasure out of baking cakes and breads and cooking such things as hearty roasts, stews, and braises.  Last night’s dinner was no exception: a little spin on that classic dish shepherd’s pie. 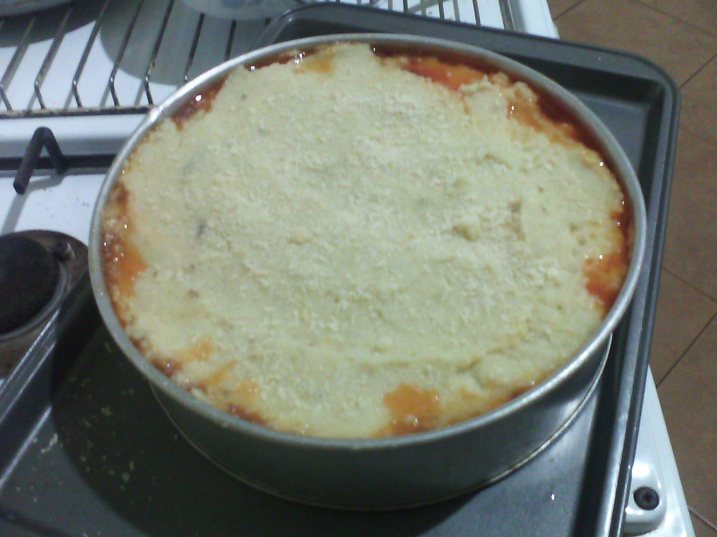 Stewed mince at the bottom, fluffy and creamy two-veg mash on top

My version is called Rancher’s Pie as it involves a mix of beef and pork mince.  It is a variation that takes on a Spanish-Filipino classic called picadillo, a soup-stew that features mince sauteed with onions and garlic before being cooked down with tomato sauce, broth, raisins, carrots, and potatoes.  At our house, this particular dish is served over mounds of hot, fluffy rice just out of the cooker and doused with lashings of Knorr Liquid Seasoning.  It is a rich, rather oily dish that is totally comforting when eaten on either a cold night or on a weeknight after a particularly harrowing day at the office.

For this dish, I paired the picadillo with a veg-filled version of Paris mash.  This spin on mashed potatoes calls for mixing a whisked egg along with the milk/cream and butter.  The end result is a richer, more substantial mash.  Mine also has the virtue of having cauliflower and garlic along with the spuds for a more flavorful mash.  I also tossed on some grated Edam cheese over the top before baking, adding yet another layer of scrumptiousness.

Instead of adding all of the picadillo to the bottom of the pie, I chose to strain off the sauce before putting the stewed mince into the cake tin I used for baking.  This savory liquid got reduced and thickened a bit with some cornstarch to make a particularly moreish gravy. 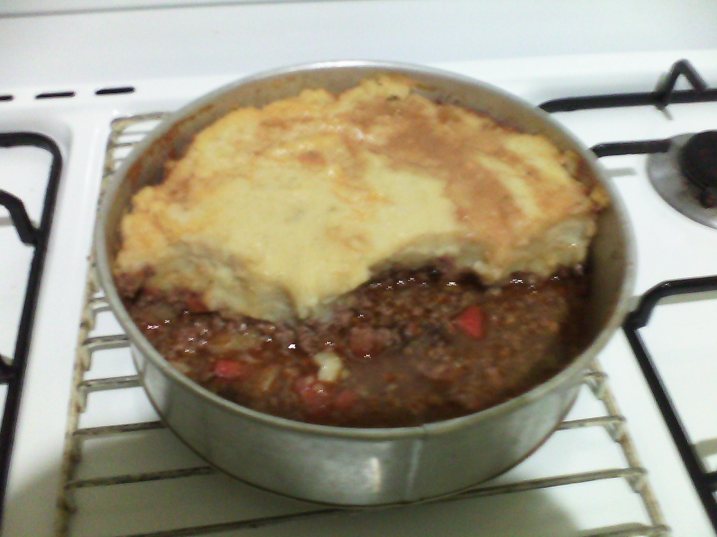 Even the leftovers were delicious!

I can’t exactly give you the recipe for this particular wintry meal as I’m still giving it a few tweaks.  But let me assure you that it was a hearty treat that warmed us all up on a cold evening.  Oh, and the leftovers went down a treat for breakfast the next day.  😀