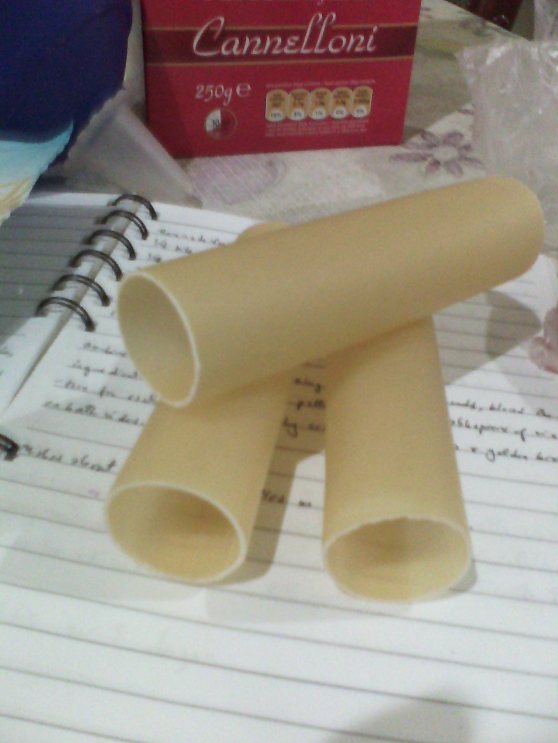 Cannelloni for your thoughts

I managed to catch The River Cottage Treatment yesterday and was fascinated by the way Hugh Fearnley-Whittingstall changed the minds and eating habits of five individuals who spent much of their lives eating fast food or what the Brits call “ready-meals” – frozen, pre-cooked dishes that you just pop into a microwave to thaw out before eating.  He turned them on – turned them back – to making their own meals from scratch after proving that doing so was both time-efficient and much cheaper than stocking up on the storebought stuff.  It was also a great way for those city slickers to know where their food actually comes from, thus helping them to develop and even greater appreciation of it and those who help bring provender to kitchens and tables.

Here in the Philippines, the situation has been equally dire: most urbanites prefer take-away meals from one fast-food joint or another, saying that they haven’t got the time nor the energy (and, in many cases, even the proper skills are absent) to prepare good, wholesome, and delicious food at home.  That annoys me a great deal: the same people who spend hours in the gym after work, the same people who play video games hour upon hour, the very same people who watch too much television while gobbling scads of junk food claim to have neither the time nor the energy to make, serve, and enjoy a proper meal.

There is much to be said about taking time and effort to make a meal – and a very good one at that – and the satisfaction level is significantly higher.

All of them filled by hand, by the way.

Saturday’s cannelloni al forno was one of those dishes that was really worth the effort.  It involves stuffing tubes of pasta with a herb-seasoned pork forcemeat (actually an old sausage recipe of mine), smothering the lot with a rich-tasting mushroom and eggplant ragu, and drenching the whole thing with bechamel sauce before baking it into a magnificent, full-flavored, deeply satisfying casserole that handily serves a dozen people.

Note, though, that I did take a few shortcuts here: the cannelloni I used were the boxed, no-need-to-boil kind which I hand-filled with spoonfuls of the sausage mixture, and the sauce uses pre-packaged tomato sauces.  Nor did I make my own stock; I believe in doing stuff from scratch, but I’m not that masochistic.  Nevertheless, the end result was definitely worth the nearly four hours I spent making it – and it sure beats any old store-bought pasta dish hollow.

Combine the pork, sage, thyme, cayenne, salt, and black pepper till well-combined.  Divide into 24 portions and stuff these into the pasta tubes, leaving some space on both ends.  Arrange the tubes in a single layer in the baking dish.

Melt the butter in a saucepan and add the flour, stirring till it becomes a good, thick paste.  Pour in the milk and cook whilst stirring till bubbly and slightly thickened.  Remove from heat and whisk in the egg and half the cheese.  Return to heat and cook till it bubbles again.  Pour evenly over the sauced pasta and sprinkle over the remaining cheese.

Bake for 45 minutes.  Remove from the oven, sprinkle with the chopped parsley, and serve immediately.