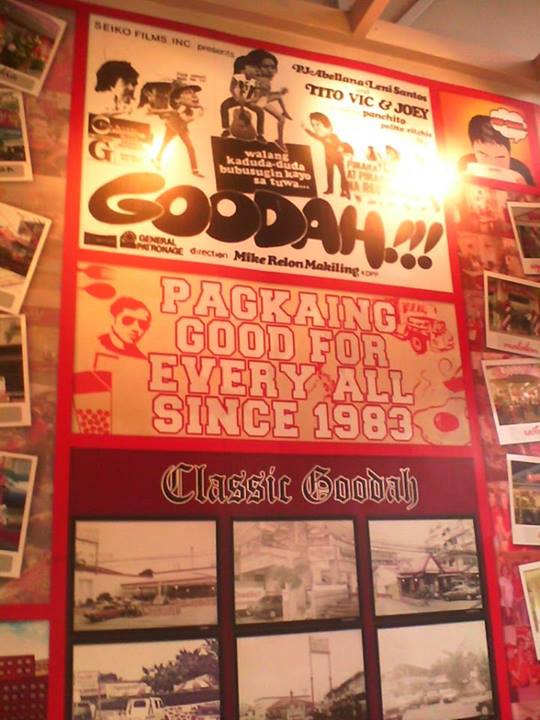 When I was a kid of about ten or eleven and the family made the annual nighttime pilgrimage to Paranaque’s Manila Memorial Park to commemorate All Saints’ Day (a.k.a.: the Filipino counterpart of Mexico’s Dia de los Muertos, a day when people head to cemeteries throughout the country to pay their respects to the dead), we would usually stop by a small lugawan (an eatery specializing in lugaw – congee/savory porridge) near the entrance of BF Homes called Good Ah.

Good Ah first opened its doors in 1983 serving up simple yet substantial fare for weary commuters and those strapped for cash between one payday and the next.  It is also, interestingly enough, one of the first local eatery chains to offer 24-hour service for its customers.  In the mid-1980s, it became so popular that it was immortalized in the comedy film Goodah top-billed by local comedy trio Tito, Vic, & Joey and veteran comic Panchito.

As stated previously, its primary stock in trade happens to be the local take on road food.  ‘Silogs (garlic fried rice, fried eggs, and one’s choice of protein) and two kinds of congee have always been on the menu.  Their arroz caldo (chicken congee with chicken chunks and slivered ginger) is classic, but Good Ah’s biggest draw has always been its goto. 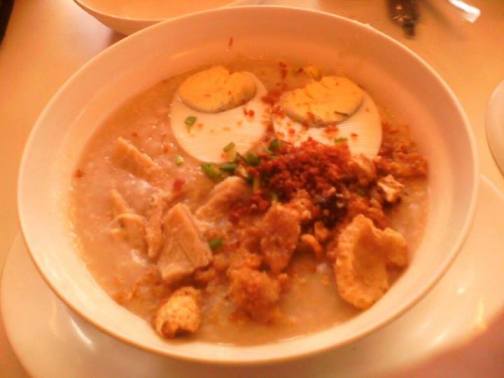 A steaming bowl of goodness

Goto is a savory rice porridge studded throughout with strips of soft, chewy beef tripe (goto in the vernacular).  The rice is cooked until soft and creamy in a mix of pork and chicken broth and the pre-cooked (pressure cooked in many cases) tripe stirred in towards the end of the cooking process.  Prior to serving, the congee is further embellished with bashed-up chicharon (pork crackling/scratchings), minced chives, and a generous spoonful of crunchy toasted garlic.

Good Ah’s goto is fairly standard in the sense that it has all of the above-mentioned comments.  However, it also has the added attraction of a halved hard-boiled egg in the mix.  On its own, the porridge is deliciously savory: not gamy at all, mildly beefy, and rich enough even for palates that aren’t that much into beef.  It is lovely enough on its own, but I am of the opinion that a light squeeze of calamansi juice, a sprinkle of patis (fish sauce / nam pla), and a moderate dash of pepper make it the perfect thing to eat during the sort of cold, rainy afternoons we’ve been having of late.