I love ginger ale and that’s no lie.  I love the zing of it, the fiery sweetness with lightly citric undertones.  There is something so wholesome, yet so incendiary about it: it’s more healthful than more popular, conventional carbonated beverages, but it’s also the sort of thing that wakes up your tastebuds, unshackling you from the usual saccharine-sweet orange-lemon-cola-lemon/lime bevvies you could pick up anywhere.

So you could just imagine how excited I was one afternoon when I found the turmeric-ginger soda over at Zigla on the second floor.

The color is a trifle off: a shade darker than the wonted pale, golden, shimmery, almost champagne-like glow of most commercially-available ginger ales – until you realize that you have to gently swirl the bottle a little because the ginger and turmeric sediment has settled at the bottom of the bottle.  (Don’t shake it!)  Once you’ve popped off the cap, your nostrils will be assaulted by the sharp, zingy, fiery aroma of fresh, just crushed rhizomes.  If you have a nasty head cold, the smell alone will be enough to clear those clogged sinuses!

Flavor-wise, it is also unlike any ginger soda I’ve ever had.  It is more fiery and tart rather than just warmly sweet.  There is the faintly bitter aftertaste imparted by the grated turmeric and you have to take small sips of the stuff rather than huge gulps as drinking this too fast will feel like something’s burning down your throat.

Nevertheless, this dinky little soda is surprisingly healthy and is spot-on useful for dealing with sore throats, head colds, sinusitis, and even cases of dyspepsia and indigestion.  (Ginger, after all, being an excellent digestive.)  I can’t say I’ll snag another bottle anytime soon, but at least I know now what to drink if the sniffles come along.  :p

For most tourists visiting Thailand, the bulk of their culinary experience hinges on such things as the classic pad Thai, local salads made with green [unripe] mangoes, green papaya, or pomelo, and tom yam goong.  Since most Westerners aren’t so keen on rice as part of a savory meal and opt instead for the sweet sticky rice with ripe mango slices (khao niaow ma muang), they have not been initiated into the sheer, gustatory pleasure that is khao kluk kapi– stir-fried rice tossed with nam prik (shrimp paste)and served with strips of egg omelet, shredded green mangoes, and diced shallots.

In the Philippines, it is colloquially referred to as bagoong rice as the local spin on fish paste is used by Thai restaurants in lieu of the more incendiary-tasting nam prik.  For many people, it is synonymous with the words “cheap yet flavorful”, a reasonably priced meal with more than a little hint of the exotic.  Bagoong rice only needs a few shreds of sweet, grilled pork, perhaps a few bits of crisply fried fish to turn it into a meal fit for King Bhumibol himself.  One local Thai stall, however, just went a little beyond that…

Thaicoon recently opened at the Zuellig Building’s Laza Food Court and it offers reasonably-priced and satisfying meals from our neighbors in the Golden Triangle.  The saucy take on pad Thai is wondrously tongue-tingling while the Thai salads – crispy catfish and green mango – are both refreshing and make perfect meals for the sultry summer weather we’ve been having of late.  But what I currently like best at Thaicoon is its spin on bagoong rice – it isn’t just bagoong rice, it’s sizzling bagoong rice.

Thaicoon’s ample-portioned offering is cooked fresh to order and plated up on a super-heated cast iron platter with shredded green mango, shallots, shredded carrot, and egg ribbons.  You could get it with sweet pork or crispy fish, but why go for the usual when you can get your platter of khao with some crispy prawn cakes?

These are known as tod mun goong – a spin on the more popular tod mun pla (fish cakes) – and are delectably crispy on the outside, moreish and fluffy within.  The cakes are sweetly savory and taste quite fresh; you can tell that real, fat prawns were used to make them with very little in the way of extenders.  Paired with the savory, flavorful rice, you have yourself a magnificent, even regal lunch. 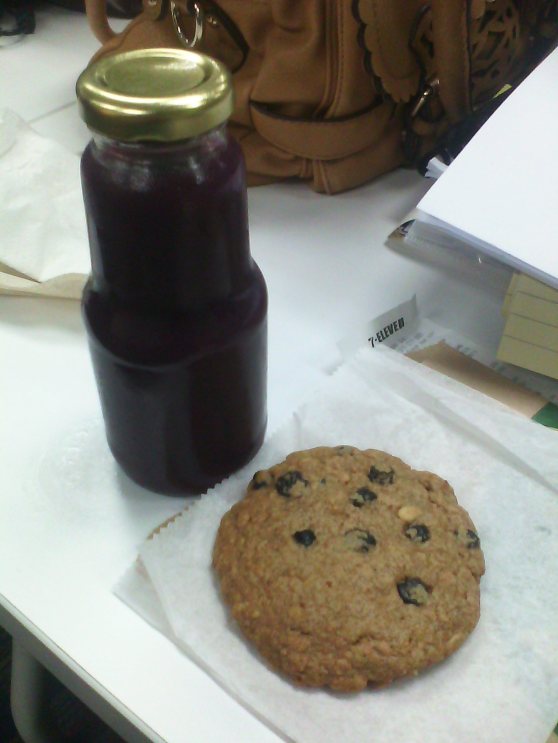 If there is one fruit I can’t really get enough of, it’s blueberries.  Yes, I know it sounds very strange considering how I was born and raised in a country famous for its glorious abundance of such tropical treasures as mangoes, pineapple, and papaya, but I’ve been a fan of the deep bluish-purple [indigo?] fruit since the day a few years back when a friend gave me some fresh berries from her family’s fruit-farm up north in Baguio.

Most people in this country only know one way of enjoying the fruit: as the topping on a blueberry cheesecake – and, even then, all they have is sugary goo rather than the sweet-sharp taste and fleshy, slightly gritty texture of the actual fruit.  Worse: while some food companies have introduced blueberry-flavored items among their product offerings, most of these are artificially flavored and don’t have any actual blueberries in them.  Most of the time, what many companies try to pass off as blueberry are actually made with grape syrup or paste: think raisin – too much raisin for comfort!

Fortunately, some companies have a heart and believe in using real fruit in their preparations.  Yesterday’s mid-afternoon nosh, in particular, was an example of that.

Shown above: Zigla‘s blueberry smoothie and an old-fashioned oatmeal cookie with blueberries from Starbucks.  The smoothie was blended from locally-sourced, organic berries sweetened with the safer sugar substitute Stevia.  It’s a rich, deep indigo drink with a balanced, sweet-tart fruitiness; it has an oddly creamy texture to it, considering that there’s no dairy involved.  It’s an interesting way to get an antioxidant fix in the middle of the workday and has the additional advantage of waking you up sans caffeine.

The cookie, on the other hand, was magnificently chunky and actually had whole dried blueberries in every bite.  I loved how the little pockets of fruit contrasted with the grainy texture and nutty taste of the cookie as a whole.  Definitely ordering this again; probably next time with a massive tumbler of iced chai.

I don’t know anyone who doesn’t like fried potatoes.  Whether it’s French fries or waffle fries, hash browns or tater tots, they are irresistible, toothsome, and totally satisfying.  I mean, really: they may be unhealthy, but these are so moreish and comforting that one cannot help munch down scads and scads of crunchy-skinned deep-fried spuds.

While fried potatoes are delicious enough with just a bare sprinkle of salt, I’ve taken a cue from how McDonald’s serves its spuds in Japan.  In the Land of the Rising Sun, fast-food munchers are given small packets of flavored salt with which to season the snack.  Popular flavors are nori (seaweed), curry, and the incendiary one based on the fiery shichimi togarashi.

But I say: why stop at flavored salt when you can go the whole hog and toss the spuds in furikake for a real burst of flavor?

Furikake is a catch-all term for dry seasoning mixes meant to be sprinkled onto or stirred into cooked rice.  The most common one, norishio, is a very basic mixture of finely chopped nori, sesame seeds, salt, and sugar.  Admittedly this tastes pretty good on both rice and fried spuds, but why stick to basics when you can seriously amp up the flavor factor with katsuoboshi?

The fried potatoes at the top of this page were tossed in katsuoboshi (dried, salt-cured bonito shavings) furikake and have a lovely umami flavor profile that sets them well above standard-issue spuds: a salty, herbaceous flavor from the nori, a faint meatiness from the fish flakes, and a very subtle sweetness from the sesame seeds.  This is definitely something home cooks ought to try in their own kitchens, but if you’re not so culinary-inclined, I recommend bringing a packet of furikake (they’re available in the Asian food aisles of major supermarkets and Oriental grocery stores) and sprinkling the stuff liberally over fast-food spuds. 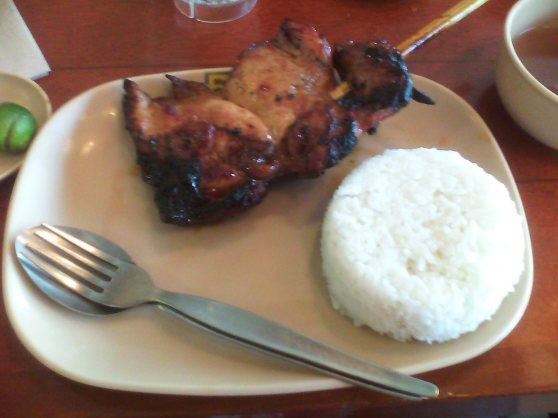 Who can say no to barbecued chicken?

Inasal na manok – colloquially known as chicken inasal – is a specialty from the Central Philippines, particularly from the province of Negros Occidental where it is the signature dish of Bacolod City, though it is also a popular viand in neighboring Iloilo.  It is, in essence, another barbecued chicken dish: bone-in chicken segments threaded onto bamboo skewers and grilled till charred on the outside, tender and juicy within.

However, unlike the sweeter marinade preferred in Luzon or the one from Mindanao which is more like the Malaysian satay with its nutty taste, the chicken is steeped in a mixture of native lime (kalamansi), lemongrass, ginger, garlic, and the potently chili-infused sinamak vinegar prior to grilling over coals.  During the grilling process, the chicken is given another layer of flavor as it is basted with a mixture of melted salted margarine mixed with ground black pepper and a generous splash of annato {achuete} oil which gives the skin a distinctive orange hue and a peppery, slightly floral savor that is further amped up by the smoky taste imparted by the charcoal.

When I was a kid, the only place you could get inasal was at the Bacolod Chicken House in Paranaque.  Nowadays, though, thanks to Mang Inasal, you could get a decent barbecue meal in just about every part of the country.

Careful about this one: it’s VERY hot!

Touting itself as the Philippines’ first fast-food barbecue joint, Mang Inasal’s main stock-in-trade is grilled chicken: large, hefty servings of it and you can get unlimited rice refills – and all that for less that P 120.00 (US$ 2.71).

Mang Inasal gives diners three choices when it comes to its chicken meals: pecho (a butterflied wing and breast), paa (butterflied thigh and leg quarter), and the spicy paa which features a thigh-and-leg quarter soaked with plenty of fiery siling labuyo (nam prik; bird’s-eye chili) to give it some extra heat.  It also offers things like pork barbecue, sisig, and daing na bangus (salt-cured milkfish), but the chicken is the star of the show here.

Considering that it’s fast-food chicken, the segments of fowl you get on your plate are surprisingly tender and are quite flavorful.  Even the breasts which tend to be dry and stringy at most fast-food dives are moist, juicy, and totally infused with flavor.  The dark meat is no slouch, either, and you can taste the herbs used to marinate the chicken in every bite.  Just be very careful with the spicy paa, though; it is decidedly incendiary, knocks down a lot of rice, and you’ll be lurching for your drink almost as soon as the first bite goes into your mouth.  It makes for good pain, though.  🙂

Every chicken meal comes with a cup of rice, a bowl of deliciously sour sinigang broth, and a small sauce with a split kalamansi and, should you opt for it, a whole siling labuyo.  There are three bottles at every table: sinamak vinegar, soy sauce, and buttery achuete oil.  The vinegar and soy are great for seasoning the fowl; the oil is something to sprinkle into your rice to make your own spin on the popular orange-hued Java rice.  Waitstaff will go around with a bucket of hot rice with which to refill diners’ plates should they choose to have more.  It’s definitely the place for people with immoderate appetites and modest means.  😀