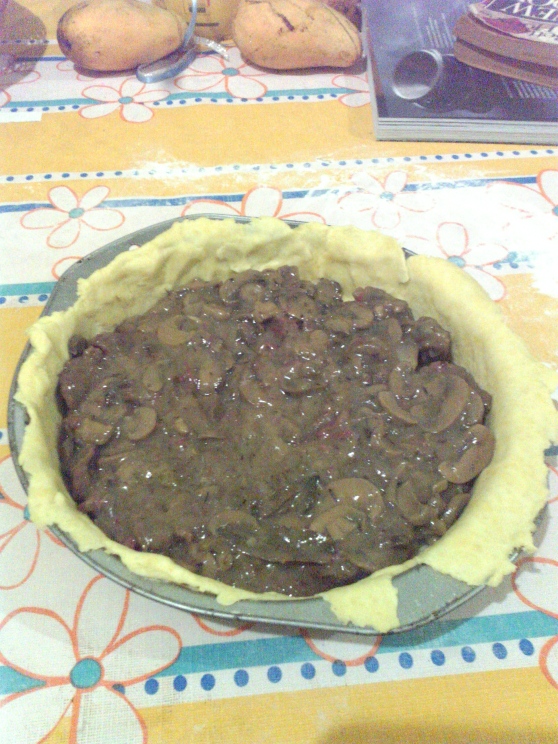 What to do with a rich beef stew…

I’ve been writing professionally since I was seventeen and, in the over twenty years that I’ve been in the business, people ask me how does one get from an idea to a finished work, be it a press release, a script for an AVP, or – most ambitiously – a full-length novel. It’s a regular cliché to say it, but it is true: all it takes are inspiration and timing.  You just have to get the right idea at the right time and things just go swimmingly from there.  However, – and this is a big however moment here – never make the mistake of assuming that the right idea pops up in an instant; it never does.  What you sometimes assume to be the right idea ends up getting shelved almost as soon as something new comes through your brain.  It’s the rare, inspired notion that sticks around long enough to get developed into something more substantial.

The same thought process applies where meal planning and cooking are concerned.  People get bored when you serve them the same things over and over again, but we are all too often stumped as to what to prepare and serve.  Thank goodness, then, for cookbooks and magazines that show a wealth of things to try, things out of the ordinary to tempt even the most jaded of palates.  In which case, going through anything by Nigella Lawson and Martha Stewart goes over well for anything sweet or bready; for savouries, that’s where I put my faith in Jamie Oliver or, better yet, Donna Hay. 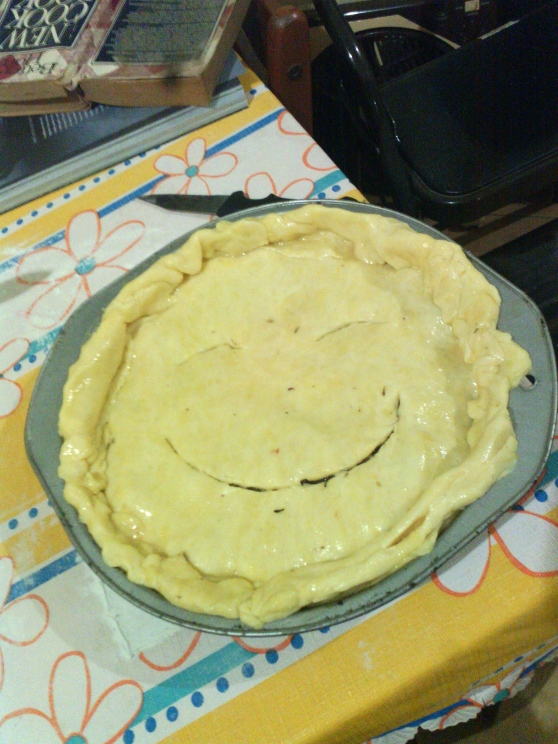 Put on a happy face!

Seeing how the weather has begun to grow cooler (knock wood; it still gets too hot at certain times of the day), the light meals of summer are beginning to look a touch insubstantial for improving appetites.  Thanks to a friend’s recent gift of Donna Hay’s Seasons: The Best of Donna Hay Magazine, I was able to do a grand rummage for heftier, heartier, more satisfying dinner options – and that’s where the notion of a savoury pie kicked in.

Savoury pies are nothing new to local palates.  Thanks to the influence of 300 years of Spanish rule, local cooks have put their own stamp on such Castilian classics as empanadas (savoury hand-pies filled with shredded chicken or beef/pork mince) and pastel (the Spanish version of a pot pie filled with either stewed chicken or ox tongue in mushroom gravy).  While empanadas are a common enough snack for local urbanites, the pastel is usually reserved for special occasions such as fiestas or significant family events like christenings or weddings.

People in English-speaking countries, specifically those that are part of Great Britain or the British Commonwealth, on the other hand, nosh on pie as a main course on a more regular basis, particularly during the colder months of the year.  I remember seeing a recipe for steak and kidney pudding and another for game pie in Nigella Lawson’s How to be a Domestic Goddess; and an old October issue of Jamie Oliver’s self-titled magazine featured a vegetarian version featuring in-season apples with potatoes, fennel, and cheese.

My friends Floyd (and the Missus) and the Antipodean all grew up supping on pie in the fall and winter.  Floyd’s Scots granny made a smacking-good one with stewing mutton and a beef suet crust; it always came to the table with lashings of brown gravy, mashed spuds, and parsley carrots.  The Antipodean, on the other hand, waxes poetic about pie floaters: individual meat pies surrounded by a moat of split pea soup; he says it’s a meal he hasn’t had in ages. 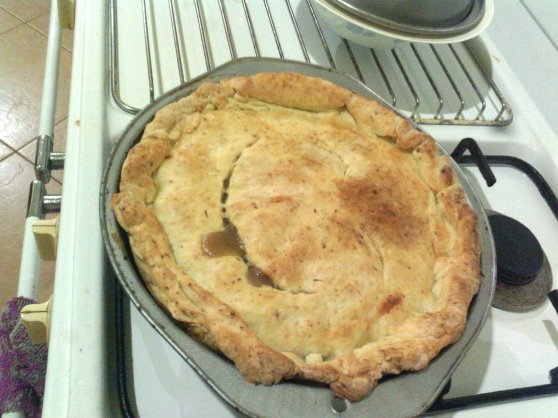 Bake till nice and golden

Keeping my friends’ experiences in mind and wanting to give my family a more interesting main on the Saturday evening table, I went over the Autumn chapter of Seasons and lit upon Donna Hay’s recipe for a beef, onion, and red wine pie with two crusts: shortcrust on the bottom, puff pastry on top.

The recipe itself looked easy enough: stew beef till tender, lump into crust #1, top with crust #2, bake, serve – nothing to it.  But the thing about the original recipe is that it calls for store-bought crusts.  Now, unless it’s puff pastry (which I can never do properly), meat pies are better made with homemade, done from scratch crusts.  And, since we’re already on the subject of hearty, rib-sticking meals, even the crust needs to be sturdy, flaky, substantial, and satisfying – not just a mere receptacle for the rich beef stew within, but also a treat in its own right.

And so, dear readers, the end result was actually built on two inspirations: Donna Hay’s richly savoury filling but encased in a classic cheese pastry straight out of the Better Homes and Gardens New Cookbook – an old-school recipe that has yet to fail me.  The herb-spiked and mushroom-loaded stew with its chunks of soft, tender beef went beautifully with the crisp-tender pastry, the melted cheese adding its own slightly salty nuance to the whole deal.

I’ve tried to adhere to the letter to the original filling recipe, but found that I was out of red wine.  No matter: that’s where things like Chinese shaoxing wine or dark beer come in, adding an alcoholic fillip that mellows into a soft sweetness that balances the robust character of the other ingredients.  I also threw in a touch of cream to add body to the gravy – and it is truly a deliciously inspired notion that makes the dish so much more delectable. 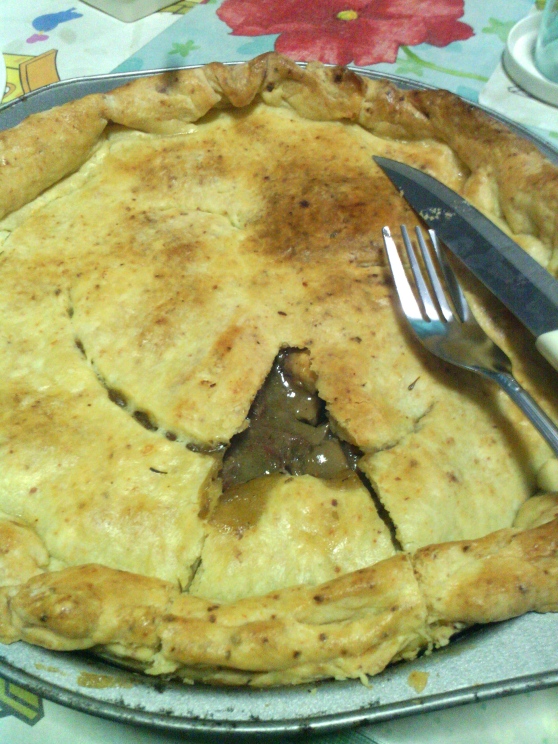 Come and get it!

Heat the bacon fat in a saucepan over medium heat.  Brown the beef in batches; set aside.  Cook the onion in the remaining fat until softened; add the garlic and cook until slightly browned.  Add the beef, mushrooms, stock cube, and thyme; cook for a few minutes.  Add the mushroom brine, water, and wine and stir well.  Bring to a boil, then lower the heat to a simmer.  Leave to cook for 45 – 50 minutes or until the beef is tender.

In the meantime, make the pastry.  Rub the shortening and cheese into the flour until it resembles coarse breadcrumbs.  Sprinkle the water in a tablespoon at a time, pressing the dough with a fork so that it adheres.  Knead the dough into a ball and divide into two.  Roll out one ball on a floured surface and use it to line a 9-inch pie plate.  Set aside.

Add the slurry and cream to the simmering stew and stir until thickened.  Taste and adjust the seasoning.  Remove from heat and allow to cool for 10 minutes before pouring into the pastry-lined tin.  Roll out the remaining dough and cover the stew, pressing and crimping the edges together to seal.  Brush the top of the pie with beaten egg; cut slits on the top to let steam escape.

Bake for 40 minutes, until the top is nice and golden brown.

Remove from oven and allow to cool for five minutes before serving.