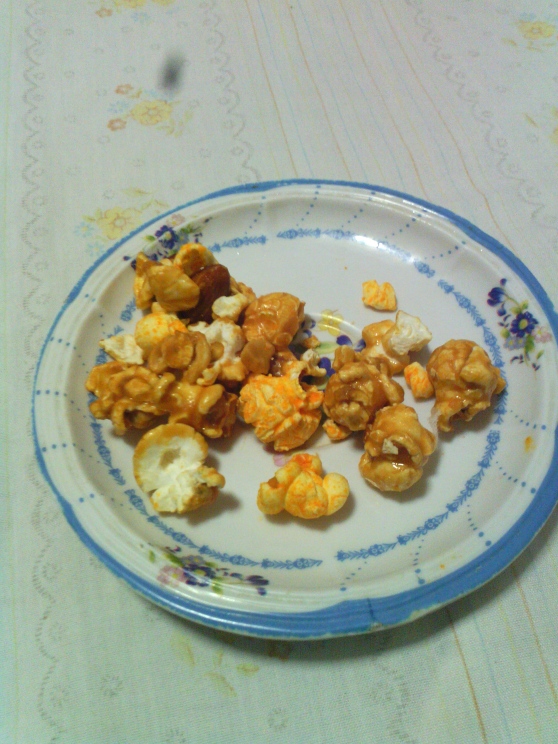 Popcorn has long been the go-to snack of movie-goers (butter, sod it; don’t skimp on the butter!), impulsive snackers (it’s crunchy and you can gobble scads of it in one go), and chronic dieters (hold the butter and the salt).  Even a die-hard potato-crisp-munching sort such as yours truly will willingly fall back on popcorn if push comes to shove.  In my case, however, it would have to be in the form of PopCorners popcorn crisps (the ones that look like tortilla chips, the crunchy triangular kind), a tub of Chef Tony’s Popcorn either in cappuccino-almond or green tea & cashew), or this most recent find: the Chicago Mix from the Chicago Popcorn Shop.

As its name so obviously states, Chicago Mix was born in the Windy City.  The original was first made and is still being sold by the now-legendary Garrett Popcorn Shops.  This unusual but highly addictive combination of caramel and cheese popcorn came about just after the Second World War when customers would buy a bag of each and awkwardly combine them to enjoy the sweet and salty mix of flavours.  In 1949, the folks at Garrett decided to mix the two flavors up, finally striking the balance between sugary caramel and tart, salty Cheddar.  Since the combination spread like wildfire throughout Chicago with imitators popping up almost immediately, the Chicago Mix was born.

Of course, one needn’t fly all the way over to Illinois to get a fix of Chicago Mix; local franchise Chicago Popcorn Shop replicates the treat just as well – with its own twist.  Crisp, fluffy popcorn bites are well-dusted with a tangy Cheddar powder or drenched with a buttery caramel that hardens into a snappy, sugary glaze.  Candied cashews and roasted almonds are thrown in to add a toasty crunch to the whole thing.

I confess that the Chicago Mix is seriously addictive; you won’t want to nosh on anything else for quite a while.  😉