Can there be anything better than a poached egg?

Longtime readers of this blog are aware that I am a major fan of poached eggs.  I mean, seriously: not even the classic aji-tamago (mollet-boiled eggs) used for classic bowls of ramen can come close to the thrill of biting into an egg poached in broth – just solid enough on the outside, molten and oozy within.  Yum.

I’m also a serious fan of eggs Benedict and eggs Florentine; the first when I’m craving seriously indulgent sustenance, the second when I need to amp up my veg intake.  Either way, the egg (and, of course, the Hollandaise) is the clincher for me; criteria as above.

So you can just imagine how giddy I was when I saw chef Dominic Fasano‘s recipe for poached eggs in salsa verde in the Spring 2014 issue of EMMA Magazine.  It took my favourite way of cooking oeufs to a new level: cooking them in a thick, rich sauce instead of cooking them in either water or clear(ish) broth.  It is a technique that gives the eggs a whole lot of flavour, depth, and an absolutely mouthwatering richness.

However, I had a bit of an issue with Chef Fasano’s recipe: it calls for cracking open a jar of salsa verde to cook your eggs in.  This sort of raised my eyebrows, seeing how in these cash-strapped times in my part of the world such an act would be seen as one of indulgence – but a rather ostentatious, wasteful one at that.

Now, I had a small cup – well, barely a cup – of picadillo left in the fridge from Sunday dinner and some macaroni cooked with ham-sausages in chicken broth.  So, as not to waste anything and clean up the fridge in the process, I mixed the two together (quite delicious, actually) and heated them to a simmer over medium heat.  I cracked an egg over as per the original recipe, covered it for a few minutes – et voila!  Savoury eggs in sauce for breakfast!

This recipe is quite easy to make, a real doddle.  You can use any leftover sauces or stews you have in the fridge: tomato-based ones such as picadillo or caldereta work beautifully, as do rich beef gravies or braised chicken.  I daresay leftover Japanese-style curry would also work a treat.

In a frying pan over medium heat, bring the sauce to a bare simmer.  Carefully crack over a fresh egg or two and cover.  Cook for 3 minutes if you want a runny yolk; 4 if you want a firmer result.  Remove from heat and serve immediately over rice or with hot buttered toast.

Skinny tea to help you squeeze into skinny jeans?!

I’ve been a fan of the Schlurp Tea Artistry team ever since they first came out with the Schlurp Your Tea series of bottled milk teas a couple of years ago.  These were the first bottled milk teas in the Philippine market that actually tasted like tea as opposed to just sweetened milk with about a bare smidgen of poor quality black tea.  Their tea jellies at the bottom of every bottle were none too shabby, either: not too sweet and just astringent enough to add contrast.

These days, the folks at Schlurp now offer a series of bottled iced teas that are a wholesome and delicious alternative to the sugary faux iced teas being flogged by many softdrink companies.  The new line features Assam, Darjeeling, and Ceylon black teas brewed and flavoured with a touch of fruit juice: golden lime, guava, and lychee, as a matter of fact.  These err more on the puckeringly tart side, but I find this more delicious and certainly more refreshing than commercial tea drinks since they are more natural and don’t give you a bad case of oversugared throat afterwards.

Of course, I take their claims that their tea will help me squeeze better into my skinny jeans with a grain of salt, but the tea is certainly top-notch and worth the extra penny.

The o-bento, the multi-compartment Japanese boxed lunch, has long been a popular choice for many people as it features a delicious variety of treats to satisfy even the pickiest eaters.  For most diners, it is the menu item that delivers the most in terms of both value and variety: a box full of good things that you can choose to share with a friend or enjoy on your lonesome, savouring varying tastes and textures in a single meal.

One of the most interesting o-bento I’ve had in recent years is actually from a Chinese restaurant – Mr. Choi Kitchen – rather than Japanese and it is not referred to as a bento box.  Instead, it’s listed on the menu as the assorted cold cuts rice topping.

Yes, the name is something of a misnomer because the assorted bits and pieces are tucked into compartments apart from the rice, but you have to admit that it does look good and is actually a tasty thing to have when you’re feeling absolutely peckish and not in the mood for a hot meal.

The primary proteins here are pork asado (char siu) and soy chicken, both of which were nice, tender, deliciously flavourful.  The sweetness of the pork and the saltiness of the chicken are balanced by the sides that come with the dish: braised tofu with bok choy and a tart, lemony selection of mixed pickles (carrot, jicama, and cucumber) topped with a sliced century egg.  Paired with the hot rice, it made an absolutely satisfying lunch for one and you just have to love the sharp contrasts: hot and cold, sour and sweet, salty and bland, crisp and soft.  It is a lunch box I will happily chow down on again and again. 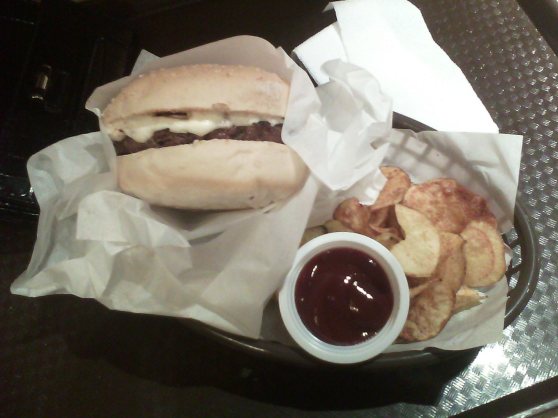 Care to join me in a burger and crisps?

If kurobuta is supposed to be the Rolls-Royce of pork, its equivalent in the beef side of the equation is something that has long been contested by various quarters over the passage of time.  When I was very young back in the late 1970s and early 1980s, the only good beef had to be US Prime.  Later on, upmarket Japanese restaurants began serving Kobe beef – the kind that came from thoroughly pampered steers who had beer in their diets and enjoyed regular massages.  Kobe beef eventually gave way to what is currently perceived as the beef on top: wagyu beef.

The name itself literally translates as “Japanese beef” (wa [Japan] + gyu [beef]), so Kobe beef itself is, essentially, wagyu.  If you want to get really technical about it, wagyu should come from a specific breed of cattle developed by Japanese agriculturists.  Honestly, though, I’d rather not quibble about that.  But it should be noted at this point that there is locally-farmed wagyu beef here in the Philippines as Japanese cattle are being reared at the foot of Mount Kitanglad in Bukidnon and sold in Makati at a quaint little Japanese-style butcher’s shop called Kitayama Meat Shop.

Bronzed on the outside, red and rare within

However, while I’ve seen the Kitayama Meat Shop along Pasong Tamo in Makati, I’ve never actually been there.  I have, nevertheless, sampled their wagyu beef – specifically at the recently-opened Malcolm’s Burgers at the Laza Food Plaza.

If the name sounds familiar to Manila foodies, it’s a part of the same group that runs Malcolm’s, one of the more popular bespoke steak houses in Makati’s Salcedo Village.  This arm of the chain, however, doesn’t serve steaks; but, as its name so obviously suggests, specializes in burgers, sausage sarnies, and the sides that go with them.

Seeing how I was peckish, I decided to give the mushroom burger (P 120.00 each; add P 15.00 for a side order of potato chips) a try.  The burger comes smothered with sauteed mushrooms and a tangy horseradish mayo which, surprisingly, does not distract from the proper beefy tang of the patty which is cooked to a nice medium-rare: burnished outside, red within.   I wish the patty had been thicker, but at P 120.00, why complain?  Besides, the mushrooms also added some serious, meaty heft to the sandwich. 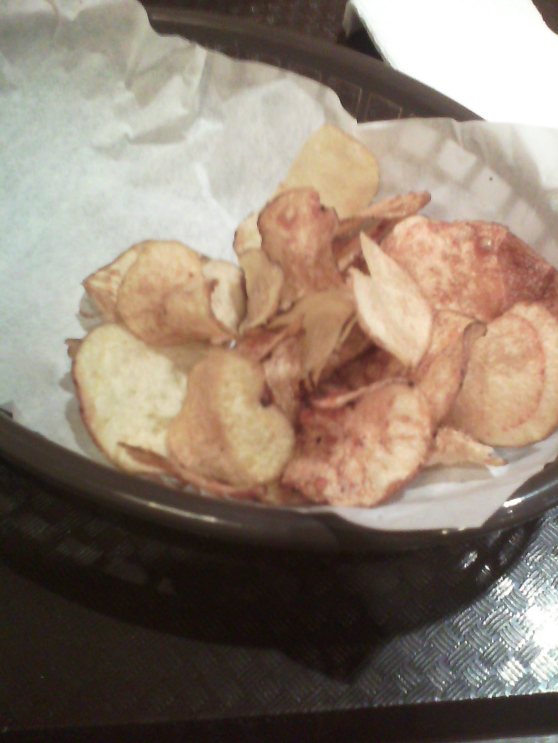 Malcolm’s has a number of nifty side dishes ranging from Buffalo wings to onion rings and standard-issue French fries.  Right now, though, if you throw in an additional P 15.00, the fry-cooks at Malcolm’s will throw in potato chips {crisps} on the side.  They’re more like  the thin-cut chips you get from a supermarket pouch, but they’re freshly cooked and are fried till bronzed over and absolutely crispy.  They’re very lightly seasoned, so the little tub of tomato ketchup works like a charm here.

It’s a trifle pricey compared to your standard-issue fast-food cow in a bun, but the quality is good and having a burger here is like giving yourself a nice little indulgence.

Known in Chinese as yuè bĭng, the standard-issue mooncake features a sweet, rich, thick, almost fudge-like filling usually made with lotus seed paste (lían róng), red mung bean [adzuki] paste (dòu shā) or mixed nuts (wǔ rén) encased in a chewy pastry that bakes to a rather bronzed sheen.  Of course, seeing how the crust on a standard-issue mooncake is loaded with lard and brushed with beaten eggs before baking, they can be very calorific.

Health consciousness on the part of the people of Hong Kong in the late 1990s led to the development of a new crust for mooncakes: one that was not as fattening as the original but would be every bit as delectable.  The new crusts were made with glutinous rice dough – similar to Japanese mochi – that were pressed into traditional moulds, filled with classic fillings or more outre ones such as chocolate ganache or durian paste, and frozen till firm.  These are known today as snowskin mooncakes.

For this season, local Oriental bakery Eng Bee Tin (of the famed custard hopia) is offering lotus-filled snowskin mooncakes with rose petals as a treat.

Each of these snowskin beauties (P 160.00 apiece / US$ 3.68) is prettily speckled with faintly pink bits of dried rose.  But these confections are anything but dainty, seeing how these are loaded with lusciously thick and creamy lotus paste and hold a fairly large salted duck egg yolk in the centre.

I wasn’t kidding about the size of the yolk within

While best served cold, these are just as delicious when served at room temperature.  The taste of the rose petals is very subtle and does not distract the eater from the delightful lotus and salted duck egg at the heart of the cake.  There is none of the toasty character of traditional baked mooncakes, but this kind of cake is just as wonderful and has the added virtue of not sitting so heavily in your belly afterwards.  Definitely worth buying again in my book.  😀

As with traditional mooncakes, these are great for sharing with friends in the spirit of camaraderie and the hope of bringing sweetness into an increasingly disconcerting and embittered world.