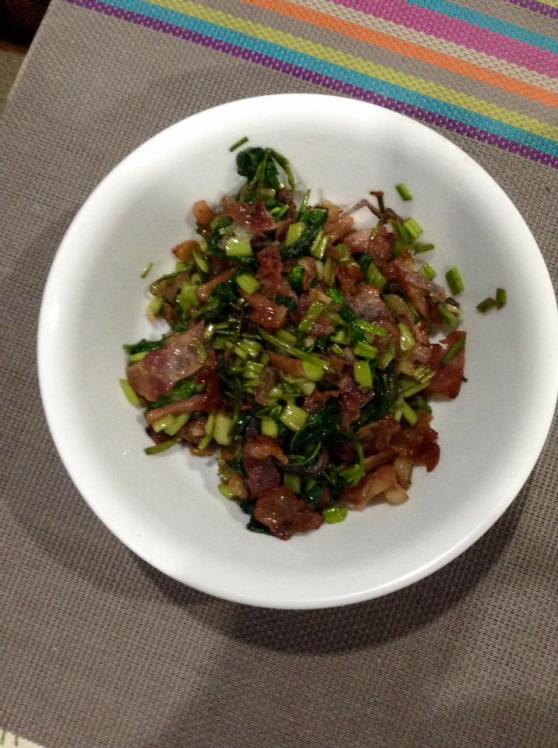 It’s been a very busy three or four months since my last post.

I’ve settled in nicely at my current workplace and have managed well through my first five issues with the magazine.  While there was a rather depressing incident involving the misspelling of someone’s name, it’s been a rather fulfilling and satisfying time.

However, that’s also meant that I haven’t had at all that much time with which to update the blog.  This doesn’t mean, of course, that I’ve been too busy to cook.  On the contrary, that’s something I’ve been doing a lot of lately.

And so, this salad.  This takes inspiration from the horensou-bacon (sauteed spinach with bacon) I love from Tori Ichi, a yakitori joint over at the new wing of the Festival Supermall. The sublime salty, smoky flavour of the bacon goes down a treat with the spinach; just that and a mound of hot rice is just heavenly.

But since spinach isn’t exactly available all the time here, I’ve used kangkong (swamp cabbage / water spinach) to pretty much make the dish at home.  I must say that it is rather savoury and, yes: it also goes well with hot rice.

In a pan over medium heat, cook the bacon until the fat has rendered and the meat has browned a little. Remove the meat from the pan; set aside.

Reduce heat to medium-low and add the reserved leaves.  Cover and leave to cook for about two minutes, just enough to wilt the leaves.  Add the balsamic vinegar and toss the kangkong and bacon till well-coated.  Remove from the heat and season to taste.

(Oh, and by the way: I’m back and blogging…if a trifle sporadically.) 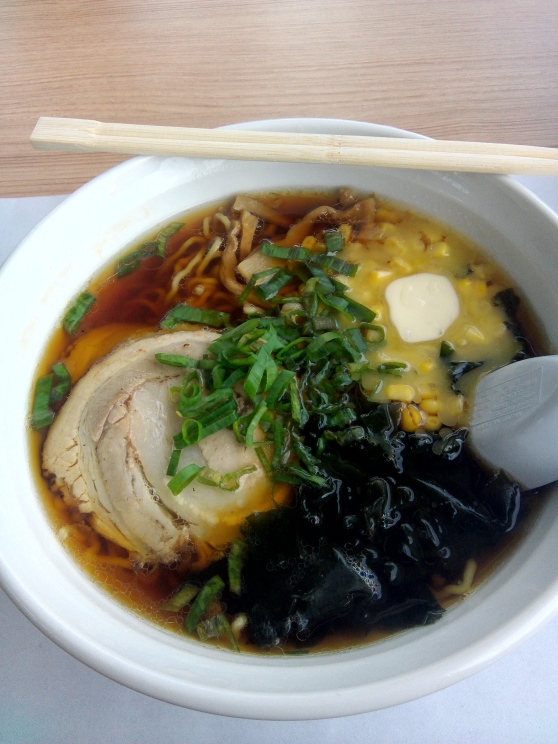 That’s the only excuse I can give my dear readers: I’ve been busy.  Very much so, as a matter of fact.  So much, in fact, that I totally didn’t post anything in September, birthday post included.  I think I needed time to get back in sync, find myself, and start over.  The bulk of 2016 from February to mid-August had to be one of the most traumatic times – if not the most traumatic time – in my life.  Suffice it to say that I am breathing easier now…plus, a surprise opportunity pretty much hauled me out of freelancing and right into a field I’ve always hankered to get into: lifestyle journalism.

But, now: for some food – and serious comfort food at that: ramen, specifically.

A recent grocery shopping trip led me to River Park, the most recent addition to the currently expanding Festival Supermall in Alabang.  There are a number of interesting new restaurants, but the one I specifically wanted to try was Ashikawa Ramen Bangaichi. 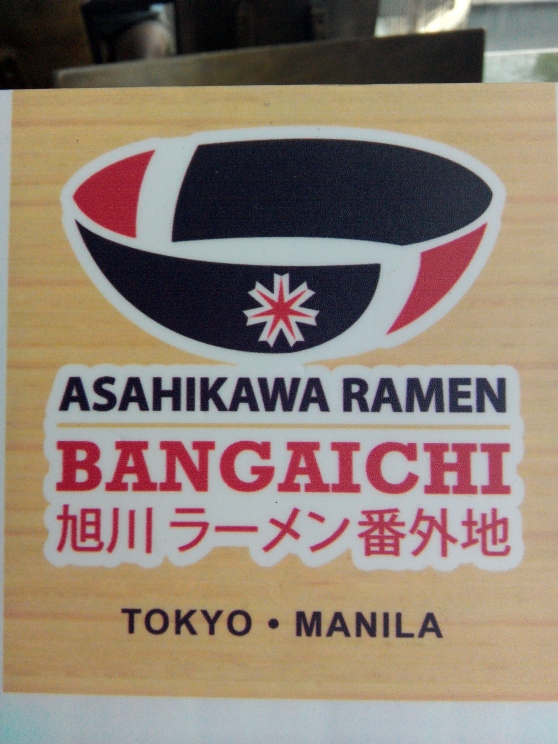 Fill up my bowl, o-negai shimasu!

A branch of a Tokyo-based chain, Bangaichi’s local franchise is held by the same group that runs the Vietnamese chain Pho Hoa.  Keeping this in mind, one should not be surprised that the back of the large menu card offers Vietnamese dishes.  But, while I’ve become a pho, bun cha, and banh mi fan, I’m not here for Indochinese flavours: I’m here for the ramen!

And a rather large and satisfying bowl of ramen, as a matter of fact.  Bangaichi’s butter corn shoyu ramen (Php 340.00) is loaded up with al dente wheat noodles in a rich, slightly porky, wonderfully umami soy-based broth.  A knob of butter melting in the hot soup adds a subtle richness that goes beautifully with bright yellow sweetcorn kernels, slivers of slightly tart menma (salt-pickled bamboo shoots), and fresh-tasting wakame seaweed.  The bowl also comes with two generous slices of chashu pork: prettily charred around the edges with the char adding a welcome and somewhat nutty bitterness to the sweet, fatty meat. 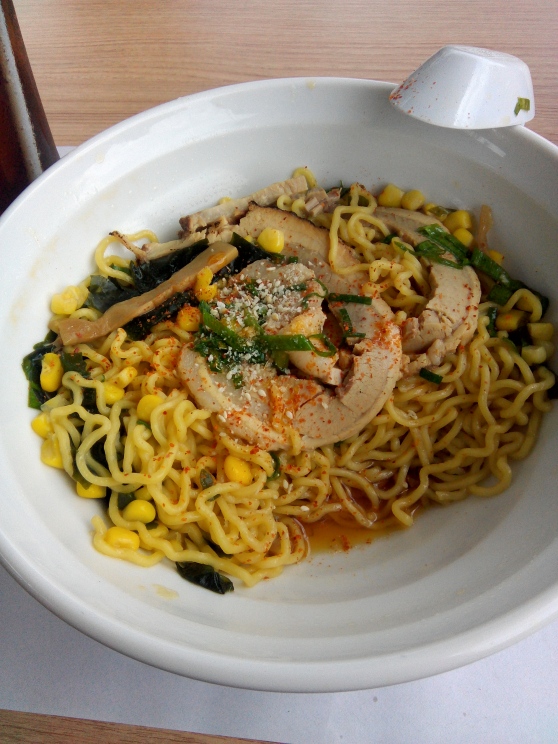 Soup’s all gone; now for the good stuff…

Call me silly, but my way of eating ramen involves sipping down all the broth before getting down to the noodles et les accoutrements.  Once the broth is gone, I sprinkle in some shichimi togarashi for a fiery accent and grind in toasted sesame for some nutty oomph.  Toss everything together, and I am a happy camper.

How does this compare to the Sapporo Corn Ramen at, say, Shinjuku Ramen?  Not bad, really; while it does not have the almost electric funk of the Shinjuku version (which has a touch of garlic to throw things for a loop), Bangaichi’s corn ramen holds its own very well and definitely is something to come back for on a rainy afternoon. 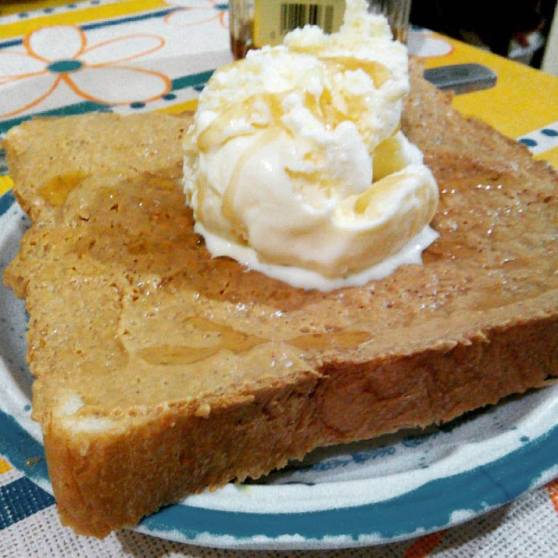 Not quite Shibuya Toast, but every bit as good…possibly better

Shibuya Toast is a dessert commonly found in Japanese or Korean cafe franchises.  It is, in essence, what it is: toast slathered with sweet toppings.  However, the toast in question is definitely not the same toast you scarf down for breakfast.  Au contraire, what these establishments do is grab a hunk of bread – say a quarter of an unsliced loaf – chuck it into the oven to crisp up, then load it up with syrups and conserves and goodness knows what else.

For this reason, I’ve never been inclined to order it.  For all that I’m for decadent desserts, turning your toast into a groaning behemoth of massive, sugary proportions is just overkill.

For the same reason, I prefer a little more constraint to my dessert toast.  I don’t want a hunk of bread; a somewhat thicker-cut sandwich slice works enough for me.  I don’t need all the bells and whistles of Nutella, matcha syrup, chocolate ganache, and gobs of sweetened adzuki bean.

Truth be told, all I need is a generous schmear of good peanut butter thickly slathered over the bread and a drizzle of wild honey.  Five minutes in the toaster gives the peanut butter a richer flavor and renders the honey crisp like thin, wispy shards of properly made caramel.  I finish it off with a scoop of plain, honest-to-goodness vanilla ice cream and a drizzle of more honey.  Easier to eat, no need to share; a divinely decadent dessert for one given elegant restraint. 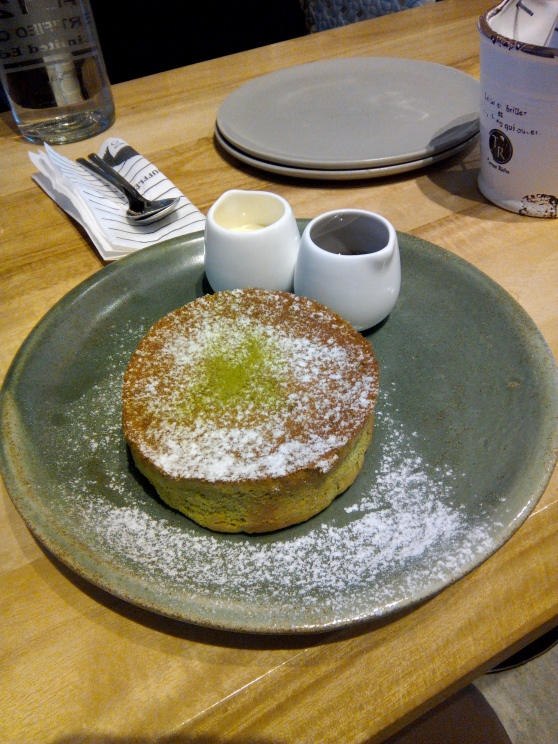 Under ordinary circumstances, pancakes and waffles are dishes usually considered breakfast or brunch.  However, a little creativity and a touch of divine decadence can take these mundane munchies to another level as seriously scrumptious desserts.

Take, for instance, the matcha souffle pancake (PhP 180.00) from a new discovery: Le Petit Souffle over at Makati’s Century City Mall.  At first glance, compared to the other green tea confections available on LPS’s menu, it looks rather plain: a thick, stodgy cake under a light snowdrift of confectioner’s sugar.  But when you take a bite…! 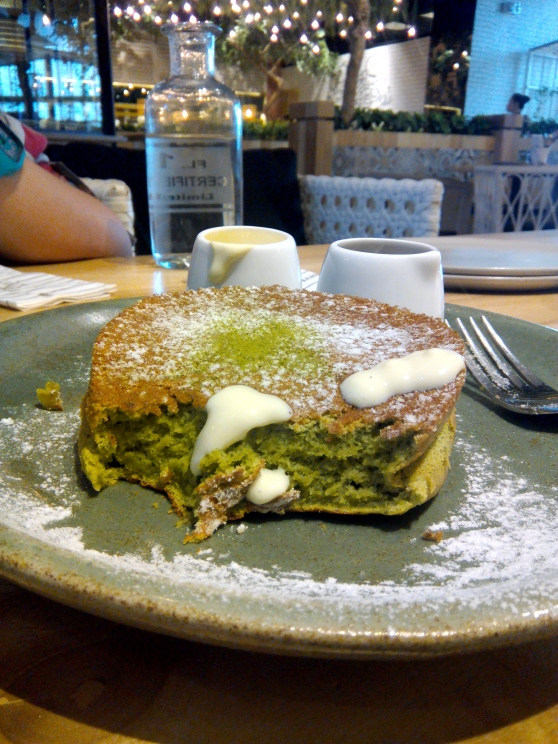 You sink your teeth into a delightfully fluffy bit of cake: somewhere between a very thick breakfast buttermilk flapjack and a light and airy chiffon.  Here, the matcha has a very pronounced flavor: somewhat floral though without the grassiness that seems to characterize the taste of more common matcha-infused sweets.  There is no bitterness, though the herbaceous character of the matcha used (I’m half-tempted to describe it as la fleur de matcha because it is so headily fragrant) adds a very mild astringent hit.

This will arrive at your table with pots of vanilla bean creme Anglaise and maple syrup.  Tip: skip the maple syrup as it adds nothing to this pancake’s charms.  Instead, generously splodge on the rich, luxurious-textured vanilla cream on every bite: the lushness works gorgeously with the pillowy texture of the cake. 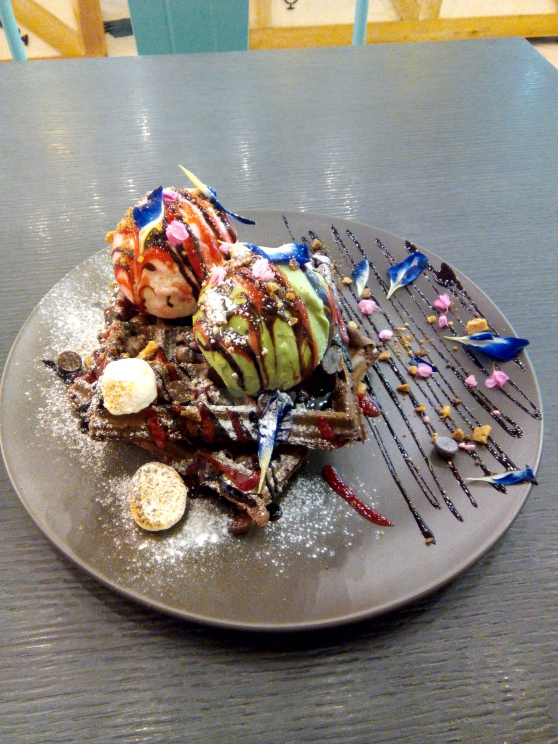 After these, you probably won’t want to eat waffles any other way

Now, as for the waffles, southerners should make a beeline for Milkbox at the Alabang Town Center and grab the dark chocolate waffle sundae (PhP 290.00 for a two-scoop serve).

Here, two dark chocolate waffles fresh off the iron are drizzled over with chocolate and strawberry syrups, dusted with confectioner’s sugar, scattered over with bits of brown sugar brittle and edible flowers, then topped with two scoops of the ice cream of your choice and a pair of toasted marshmallows. 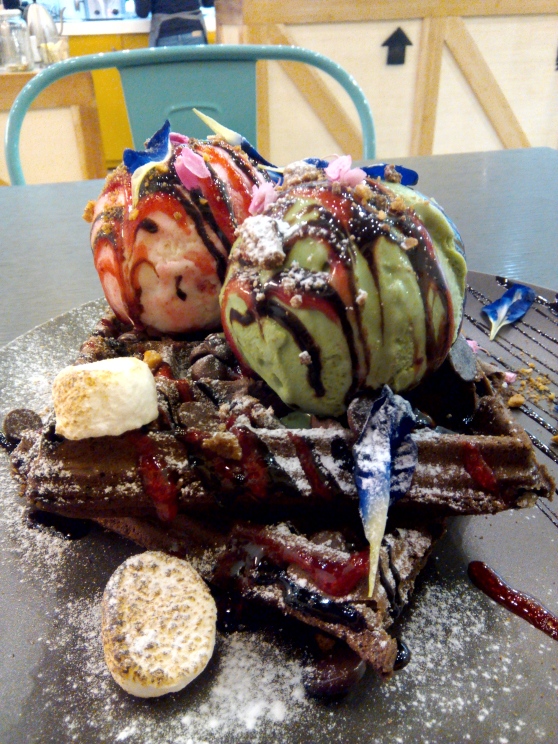 No regrets if this is the only thing you’ll eat all day!

The waffles are properly crisp on the edges and fluffy within, their crevices a perfect catch-basin for dollops of syrup.  These cakes are more bitter than  sweet, by the way: the smoky richness of cocoa evident in each bite as well as the aroma.  (I swear: you can smell the waffles cooking several feet away.)

Milkbox denizens recommend dark chocolate, red velvet, and green tea ice creams for topping this bittersweet behemoth.  I recommend the latter two: the cream cheese in the red velvet adds a welcome tang that goes nicely with the strawberry syrup while the green tea helps balance the bitterness with a somewhat nutty – almost almond-esque – nuance. 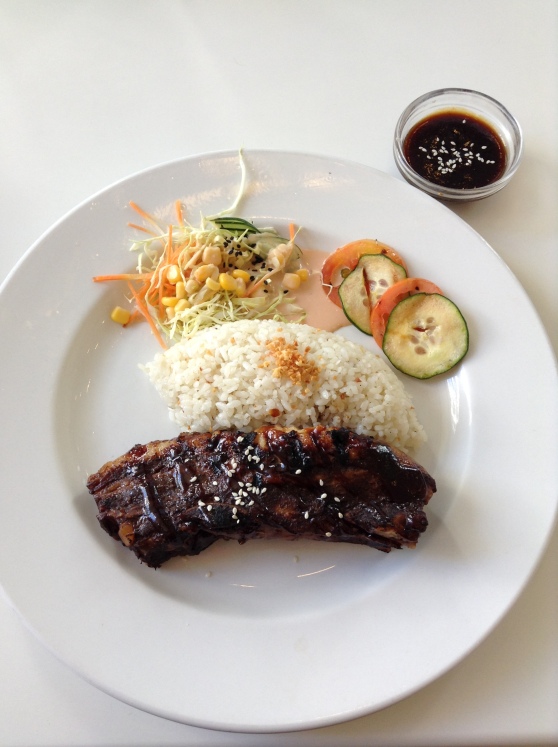 Yoshoku is the collective term used in Japan for western dishes that are given a distinctive local twist.   The most popular examples of this particular culinary style are kare raisu (rice topped with a curry gravy that is much milder than any South Asian original), omuraisu (tomato rice wrapped in a thin egg omelet), and beef hash or beef stew.  The term further extends to American dishes that the Japanese have made their own.

One delectable example I encountered recently are the Osaka BBQ Ribs over at Tokyo Bubble Tea.  Now, while it’s rather unusual to get a square meat at what is, essentially, a teashop, it’s one of my go-to places for lush, proper lunches that are more than satisfying.

TBT’s spin on a Southern classic really delivers in terms of taste, texture, and quality.  A section of pork belly ribs are marinated in a sweet mix of tangy barbecue sauce, a hint of honey, toasted sesame seeds, and soy.  After being grilled to perfection, more sauce is drizzled over and extra sesame sprinkled on top. 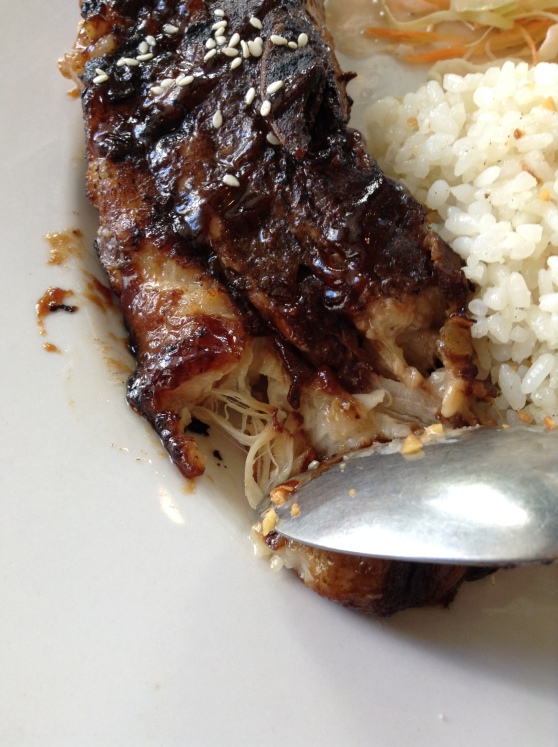 So soft, so tender, you can shred it with a spoon!

The end result is a section of ribs that fall apart almost as soon as you start prodding it gently with a spoon.  Each bite is delightful: a proper balance of lean meat and unctuous fat, all beautifully flavored by the sauce with a smoky hit from its time on the grill.

The corn slaw  and grilled veg that come with it are an excellent textural counterpoint and the sharpness of the grilled tomatoes are a nice way to offset the sweetness of the pork.  My tip: skip the mashed potatoes and go with the garlic rice for some extra-flavorful oomph in your meal.